Split pea soup made in a slow cooker is full of flavor!  After a few minutes of prep time, it cooks low and slow all day, doing the hard work for you. A thick and hearty dinner with zero effort.

There are some meals that don't exactly bring the man rushing in to the table with anticipation and a growling stomach. Dinners like meatloaf, meals where I sneak in a little horseradish or Dijon, and anything with onions that he can see. Yeah, those are met with sighs and rolling of the eyes.

I would imagine this gets thrown in there with the rest. Split pea soup. It doesn't exactly sound sexy, and it certainly doesn't back up its unappetizing name with a smoking body. Nope, this one is all about personality. Or in the case of food, flavor.

It's hard to imagine after simmering all day with a ham hock that dirt could be anything other than delicious. I mean really, ham = pig and pig = bacon. And we all know bacon is the snack of the gods. There may be a tad bit of hyperbole in that, but if you use this backwards logic, it will convince most skeptics to try a bite.

Once they try a bite of split pea soup, there's no going back.

Looking for more delicious Slow Cooker Soup creations? Have no fear, I've got you covered!

If you’ve tried my Slow Cooker Split Pea Soup recipe or any other recipe on passthesushi.com please don’t forget to rate the recipe and let me know where you found it in the comments below, I love hearing from you! You can also follow along for more good eats and travel tips on Instagram @passthesushi & @girlcarnivore, Twitter & Facebook. 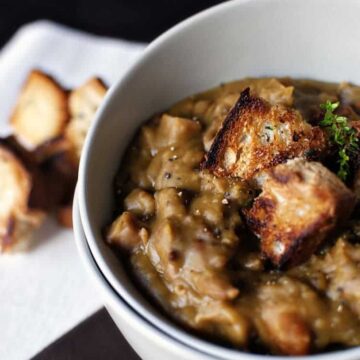 This recipe made a hearty thick split pea soup. You could thin it out a bit by adding more broth.