But then I finished a great novel last night, The Alloy of Law, and am spiraling down a deep dark nerdy path this morning looking up new books by favorite authors and watching fan made trailers. Which I didn't know existed until twenty five minutes ago. Some were ok (and kind of have me craving a not craptastic Zac Snyder stylized version of a fantasy movie with a Peter Jackson budget), others were just spliced movies, lame. But until this morning, I was pretty sure YouTube was just for people trying to get on Tosh.O and cats (especially this cat, who I'm currently obsessing over). Then it went further into i09 articles about what certain favorite characters could do and so on and so forth. Oh man I am hard core waving that nerd flag this morning.

But it seems perfect for a dreary day (in the middle. of. summer.) and a big bowl of this fresh sweet corn chowder.

And I run a comic shop, so it was bound to get nerdy up in here at some point right? If you are looking for some not girly, good old fashioned reading check out the Mistborn trilogy from Brandon Sanderson, The Wake from Scott Snyder, Hawkguy (still awesome) from Matt Fraction, and In the Name of the Wind by Patrick Rothfuss. All of which I am anxiously awaiting new issues/volumes. Any day now guys, I know you're not busy.

There isn't anything quite like a chowder to warm you up. Try these out (I know, I might be addicted to varieties of corn chowder) next time the rain comes.

If you’ve tried my Grilled Corn Chowder recipe or any other recipe on passthesushi.com please don’t forget to rate the recipe and let me know where you found it in the comments below, I love hearing from you! You can also follow along for more good eats and travel tips on Instagram @passthesushi & @girlcarnivore, Twitter & Facebook. 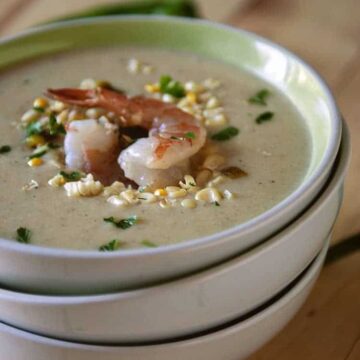 I served mine with quick grilled shrimp, but for a vegetarian option, use vegetable broth instead of chicken and this would be an awesome soup for vegetarian diets. From Better Homes and Gardens June 2013