This Creole Bread Pudding is like no dessert you’ve ever tasted! It’s made up of stale bread turned soft and sweet thanks to batter and a warm and sweet bourbon whiskey sauce.

I’ll admit…I had never had bread pudding before making this Creole Bread Pudding. I was a little bit skeptical about the idea of soaking bread in a liquid and then adding another liquid on top. That screams soggy bread to me.

But wow, was I wrong. This Southern Bread Pudding could not be further from soggy bread. Its stale bread transformed into a soft, sweet, and decadent dessert.

This recipe is so good and takes just 10 minutes to prep!

This Southern Bread Pudding is made up of surprisingly simple ingredients.

For the Bread Pudding

For the Bourbon Sauce

How to Make Southern Bread Pudding

First, in a large bowl, beat the eggs until frothy. Mix in the sugar, milk, vanilla, and nutmeg, then add the bread and raisins. Stir well, then let it soak for 15 minutes.

Transfer the bread mixture into a buttered baking dish, smooth the top, then bake until set.

In a medium saucepan, combine water, brown sugar, and nutmeg. Bring to a boil over high heat.

In a bowl, mix bourbon and cornstarch. Add that into the brown sugar mixture, then cook until the sauce thickens and smooths out. Stir in the butter, then serve warm over your bread pudding.

Is Bread Pudding Made from Old Bread?

Yep! The key to the best bread pudding is to use older, slightly stale bread.

The harder texture of the stale bread holds up so nicely in the batter, giving the final result the perfect soft texture. Fresher bread will be soggier!

If you don’t have any stale bread, you can speed up the process by baking a loaf of fresh bread in the oven for 10 minutes to dry it out.

How Do You Make Bread Pudding Moist?

The batter and the bourbon sauce both contribute to a perfectly moist bread pudding, so don’t skimp!

I’ll admit. I was a little bit nervous about the “soggy bread” texture I thought I was in for, but having made the bread pudding, I can confidently say that soggy bread is not an issue.

Leftover bread pudding will last in the fridge for up to 4 days.

Can You Freeze Bread Pudding?

Yes! To freeze leftovers, wrap the bread pudding tightly, place into a freezer bag or container, then store for up to 3 months.

How Do You Reheat Bread Pudding?

I recommend warming leftovers in the oven at 350ºF for about 15 minutes. You can also warm single servings in the microwave if preferred.
Tip: Save the extra whiskey sauce for bread pudding in a small container so it doesn’t sit on top of the leftovers, then warm it and serve it with leftovers. 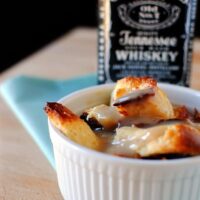 For the bread pudding:

For the whiskey sauce:

From Cooking Up a Storm