Chocolate peanut butter birthday cake - because everyone deserves that much goodness on their birthday.

I'm not sure when my blogiversary would be, as I've owned Pass the Sushi for a few years but didn't actively start 'blogging' until last year. So, we're going to party down on my actual birthday. It's Wednesday, hump day, right smack in the middle and I'm working - so why not throw a virtual b-day bash?!

I turn a quarter of a century old today. It feels as though that should be some sort of milestone but really after you can vote and drink I'm not really sure any birthday matters until you can collect social security. Then I'll know I'm living. But at 25, I feel like I should reflect a little and look ahead.

So what have I accomplished in 25 years?

Ever since I was a little girl, I assumed I would go to college. Graduate top of my class and rock the world. I was a straight A student and it never occurred to me that not going to college was even an option. I know there is plenty of time ahead of me to rock the cap and gown, but I am rather disappointed in myself for not being there already.

However, I work a job that I love. I'm the manager of a comic book store. I got to grow up and work with the people that created stories for me in my childhood, and it's a pretty awesome job with a great group of customers. I know that everyone probably has their ideas of what 'comic nerds' are like, but I'm here to tell you you're wrong. They are some of the most genuine people you could ever want to meet. Sure, there's a bad weed every here and there, but that's with everything.

I have lost families and made new ones. I have learned that blood isn't always binding, but the people who are unconditionally loving are the ones who matter most. Family is patient and strong, even in the most trying of times. I have had sisters and brothers come and go. I've scattered my mother's ashes along the mountains of Shenandoah and held tight to the few happy memories we had.

My father and I have an inseparable bond that I wouldn't trade for the world.

I've fallen in and out of love and am still learning what all of that really means. I've seen the magic of a couple flirt after 74 years together. I'm happy where things are and feel no need to rush anything.

I have two of the best icing stealing, frosting licking kittens in the world. My parents had better spoil them, because that's the closest thing they are getting to grandchildren.

Best of all, things are just getting started.

And as for the future, I want to become more girly. I want to be able to paint my nails someday. Wear a skirt like I know how.

I know I will continue to grow in business, whether it be comics or something else, because I will never let my creative side smother.

I will have a small house surrounded by woods. It may not be in the mountains, but I will at least be able to pretend it is.

There will be a dog in my future life, and I already know what I'm naming it. (Don't worry, Marble, I still love you.)

I hope I never stop singing at the top of my lungs.

Also, since this is the closest thing to a blogiversary as we're going to get around here, I would like to say thank you to everyone for reading. I love the comments and growing community that Pass the Sushi is becoming. You keep coming back for seconds, and I'll keep the oven on. 🙂

And I think its time to celebrate.

So light a candle, make a wish, and enjoy a slice of chocolate peanut butter birthday cake.

Update: I have been diving deep into creating all sorts of over the top cakes these days. If Peanut Butter and Chocolate aren't really your thing (don't tell me, them's fighting words) check out these creations!

If you’ve tried my Chocolate Peanut Butter Birthday Cake recipe or any other recipe on passthesushi.com please don’t forget to rate the recipe and let me know where you found it in the comments below, I love hearing from you! You can also follow along for more good eats and travel tips on Instagram @passthesushi & @girlcarnivore, Twitter & Facebook. 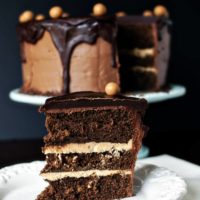 To Assemble the Cake:

Cakes really aren't my thing. Well, let's be fair, I've only featured a few cakes on here. Cupcakes are easier, cuter, and quicker to disappear with little evidence left behind. So, you'll have to forgive my lack of smooth frosting skills and decorating.

What I can tell you is this chocolate peanut butter cake is to die for.