This Skillet Pizza recipe is a perfect addition to my dinner 'for two' goal. These are super simple, fresh and the about as close as I will ever get to a vegetarian meal.

Cooking for two is tough. Stupid tough. Everything is packaged either too big or too small. I feel like Goldilocks. Don't get me wrong, we eat like champs around here and I'm not looking to make everything with tiny portions, but some nights we just need something for the two of us that doesn't leave us dreading leftovers for the next few nights.

Lately I have been trying to tie in a few more cooking for two recipes on the blog. Where I do love making big meals, these quick and easy date night dinners (and desserts) have been awesome. These little pizzas are a perfect addition. They are super simple, fresh and the about as close and Handsome and I will ever get to a vegetarian meal.

Looking for more quick and easy recipes that serve two? Check these out!

If you’ve tried my Thin Crust Skillet Pizza for Two recipe or any other recipe on passthesushi.com please don’t forget to rate the recipe and let me know where you found it in the comments below, I love hearing from you! You can also follow along for more good eats and travel tips on Instagram @passthesushi & @girlcarnivore, Twitter & Facebook. 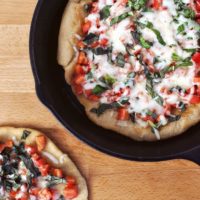 These little pizzas are a perfect addition to my ‘for two’ recipes. These are super simple, fresh and the about as close as I will ever get to a vegetarian meal.
4.56 from 9 votes
Print Pin Rate
Uncategorized