Looking for a way to spruce up those brownies? Add cream cheese - it's always  a hit! And then, swirl in a little raspberry jam for an extra kick. Caution, these are rich - so cut into small portions and enjoy!

We've heard of peanut butter in brownies, chocolate chips, brookies, and more! But have you ever heard of a cream cheese raspberry swirl? Let me introduce you to something unexpectedly delicious!

Decadent rich brownies loaded with chocolate in every bite. And then a hint of a raspberry cream cheese layer. It's an incredibly tasty combination.

The gooey brownies hide the layer of cream cheese swirled in by layering the batter. The sweet tart bite of the raspberry in the cream cheese filling is a welcomed surprise! Who knew brownies with raspberries were a thing?! 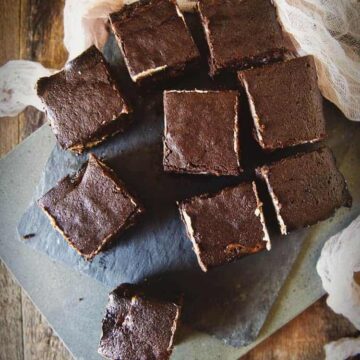 I haven't tried it yet, but I would consider replacing the jam in the batter with a little Chambord and seeing if it added a more adult twist to this recipe.
No ratings yet
Print Pin Rate
Author: Kita