Pull apart bread is the game day snack food that nobody wants to stop eating. It can be stuffed with whatever sweet or savory fillings you're craving!

I feel like a blogging slacker for not posting great finger foods, hearty chili, and messy sloppy gooey man food all week. Honestly, I'd eat like that if I could all of  the time. I'd whine like a baby about feeling fat and ill for the rest of the day and drive everyone nuts, but some great layered nachos always hit the spot. And with the Super Bowl this weekend? How dare I?!

Oh, well. There will be a kitchen throw down on Sunday for a few friends and my own palate that I will tell ya'll about later but so far (you know, 2 days in) my February has been rather rushed. I have recently been promoted to manager at the shop and will be going to Dallas next week for business. I'd be super excited, but it's business so most likely there will be no posts about how I landed in Dallas to find wild cattle roaming the runway that I could tackle and grill to a perfect medium rare. Nope, we're thinking hotel food... poo.

Just in case you want something hearty and warm to serve at your Super Bowl party, or any time as a great snack, this pull apart bread is perfect.  When I saw it I knew I had to try it and since it conveniently fits into my goal of kicking yeast in the behind, why not. 😉

Prepping for Game Day festivities and looking for the best snacks to throw down? I've got you covered.

If you’ve tried my Pull Apart Bread recipe or any other recipe on passthesushi.com please don’t forget to rate the recipe and let me know where you found it in the comments below, I love hearing from you! You can also follow along for more good eats and travel tips on Instagram @passthesushi & @girlcarnivore, Twitter & Facebook. 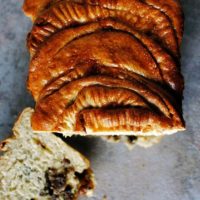 Pull apart bread is the game day snack food that nobody wants to stop eating. It can be stuffed with whatever sweet or savory fillings you’re craving!
5 from 1 vote
Print Pin Rate
Appetizer

Adapted from A Little Bit of Everything

*Fresh herbs and cheese is what was used by the A Little Bit of Everything to stuff this pull apart bread originally, however, I used a sausage stuffing left over from stuffed mushrooms and it was great! With the meat on the inside I recommend slicing rather then pulling as the title would suggest.

What do you think you'll stuff inside of your pull apart bread?