Blackened tilapia is a healthy and easy-to-make dinner that's loaded with flavor. You'll love the kick of spice... it's oh so nice.

Lets talk about drifting drivers today. I am a young female driver. My car has 'go faster stripes', so I do. However, I don't chatter on the cell phone, and I only answer texts at long red lights. I don't weave dangerously between cars just to get to the next red light faster or throw my foot to the ground as hard as I can off of green (unless someone eggs me on, then it may bring out my competitive side). I pay attention to who else is on the road, whats going on and the situations around me. I try to be a cautious driver...

Lately though, young (not always) female (not always) drivers have been scaring the crap out of me and I don't want to be lumped in with them. I heard the other day on the radio there is now a study that shows women are not as good at driving as men and that 2 out of 3 men are scared to be the passenger in the car if their female partner is driving (yet, she's probably the one hauling the kids around).

What's the sudden rush that are making more and more people drive like lunatics? Or is it just an over population + lack of proper IQ to handle the 2-ton machine at your finger tips issue? I got run off the road the other day by a woman who was on her cell phone that just had to be in my lane - without checking to see if I was there. I watched a teenage boy speed the wrong way down a one way street, and I saw an elderly man stop at a red light just to decide to run it anyway - at a MAJOR intersection! It was terrifying. I have a 15 minute drive to work and every day I see something that shocks and scares me.

So really, what is so important that people no longer care about the lives they are putting at risk?

And after that safety announcement: back to the cooking blog. 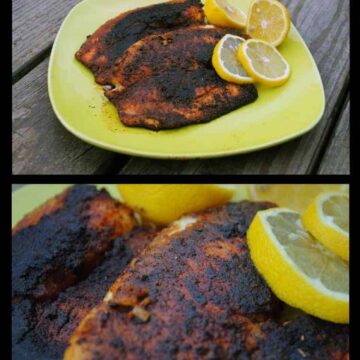 I wasn't overly impressed with this blackened tilapia recipe. The blackening seasoning for this dish was ok, however, tilapia is just a boring fish. I may want to try this on a catfish or even a salmon next time to fulfill a fish like flavor. When we blacken chicken around here - its blackened, but you can still taste the chicken. This was all blackening seasoning and no fish flavor at all. :/

On an awesome note, my sunflowers are almost as tall as the house! 😀 On a not so awesome note, a lot of my garden is suffering from the abnormally high heat and lack of any real rain accumulation... 🙁 I really hope it makes it through.