Disney's brownie cheesecake is a dessert served at Disney's Boardwalk Bakery. It's a brownie bottom cheesecake that you are going to love, and I've got the recipe so that you make it at home!

To say my boss and his family like Disney would be putting things rather lightly. They love themselves some Disney! The business, the movies, and the theme parks. Go on, ask them.

Something they love the most when they visit is the food. I often hear about the clams, salmon, buffets and wonderful meals that they enjoy while staying there. Disney employees pride themselves on their level of customer service. I'm sure we've all seen the behind the scenes shows that showcase how large and insane the food service alone is at Disney parks and resorts. And that's just one tiny part of the whole Disney experience.

Disney's brownie cheesecake is too good not to share, so here's the recipe:

Now that you've tried this decadent cheesecake atop a layer of soft brownie, I know that you are wondering what you can whip up to really wow them next time. Try one of these out!

If you’ve tried my Disney's Brownie Cheesecake recipe or any other recipe on passthesushi.com please don’t forget to rate the recipe and let me know where you found it in the comments below, I love hearing from you! You can also follow along for more good eats and travel tips on Instagram @passthesushi & @girlcarnivore, Twitter & Facebook. 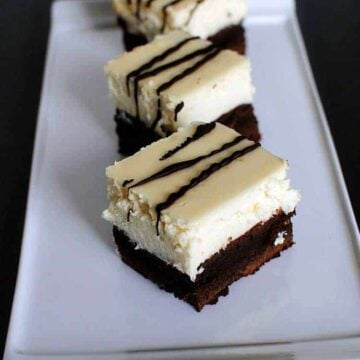 Disney’s brownie cheesecake is a dessert served at Disney’s Boardwalk Bakery. It’s a brownie bottom cheesecake that you are going to love, and I’ve got the recipe so that you make it at home!
4.15 from 7 votes
Print Pin Rate
Dessert

For the Cheesecake layer:

For those of you who read the notes after the pictures and recipes: Woot! I mentioned the other day on Facebook that I have some cool things in store for the readers of Pass the Sushi - and I do! Well, at least I think they are exciting! I have been working with some really cool people to score some sweet swag for the you guys. These are things I would be super excited to win! So stay with me. I promise that Pass the Sushi is growing, there's a lot of great food and fun to come!

For small tidbits and randomness, check out Pass the Sushi on Facebook.