Sweet and French-toast flavor contrasted by the salty bacon. Say Hello to Maple French toast bacon cupcakes. The name is a mouthful, and so are the cupcakes... a mouthful of deliciousness!

Want to streamline your baking, speed up your cooking and spend less time in the kitchen? Check your salt situation before you start baking…. Oh and check your eggs, too. Because when you look at a recipe and think there is no way that there is 30 minutes of prep work, know that the author somehow knew that you were going to have to stop a quarter of the way through to run out for salt. Then again, half way through when you realize you only have two eggs left in the fridge.
In other words, use some common sense and check everything before you start. A lesson I should have learned long before I made not two but three trips to the market today…

But so worth the trips for a taste of these maple French toast bacon cupcakes.

If you’ve tried my Maple French Toast Bacon Cupcakes recipe or any other recipe on passthesushi.com please don’t forget to rate the recipe and let me know where you found it in the comments below, I love hearing from you! You can also follow along for more good eats and travel tips on Instagram @passthesushi & @girlcarnivore, Twitter & Facebook.

Love Cupcakes? How can you not? Little personal serving sized cakes that don’t require a fork, HECK YEAH! Try these out while you’re at it! 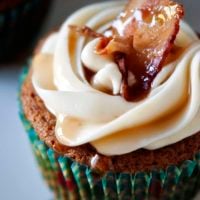