Lightened up macaroni and cheese, with three types of cheese! The use of cauliflower keeps the calories in check. There isn't a better comfort food to keep a hungry stomach happy.

As a food blogger, I feel obligated to present my readers with a Thanksgiving assortment of classic recipes, modern twists, and delectable desserts. Problem is, I don't cook Thanksgiving dinner (and to be 100% honest, I'm not down with pumpkin pie). That doesn't mean I don't enjoy a hearty scoop of homemade mashed potatoes slathered in gravy. Or a mountain of stuffing, surrounding a perfectly prepared slice of turkey. So, I'm going to do my best to present a few recipes before the big day that you may want to add to the assortment.

In late summer, we discovered the joy of roasted cauliflower and I've been keeping it on hand ever since. It's quickly become a favorite vegetable on our house and I've been looking for ways to use it as much as I can. Now, we all know someone who doesn't allow anyone to mess with their macaroni and cheese, but from time to time, we can all sneak a little something in.

I'm no dietitian, but this lightened-up macaroni and cheese recipe, adapted from from Food  Network magazine, would certainly fool me if I were counting calories. Heavy cream, lots of cheese, and pasta – I'm pretty sure the only redeeming quality is the cauliflower. However, if you want another lightened up version, check out this Gluten-free Mac and Cheese recipe.

Either way, it makes a delicious meal and even better leftovers. Especially when mixed with a little taco meat and reheated. 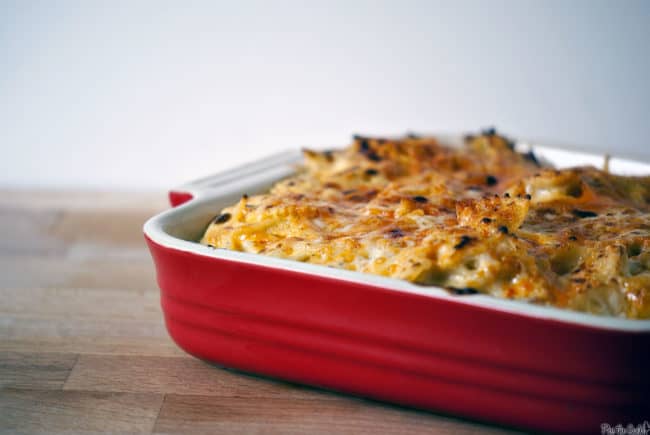 Decide for yourself if this is really lightened up or not. But taste it first, just to be sure. 😉 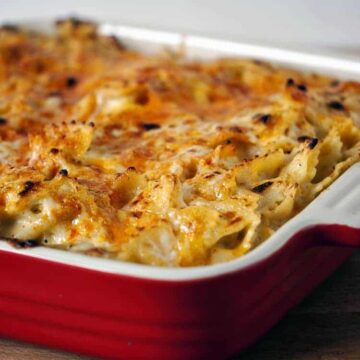