Are you hungry? Well you better be for this round of the Great Cheesesteak Debate as the boys chow down on steaks from two of Delaware's best known chains. 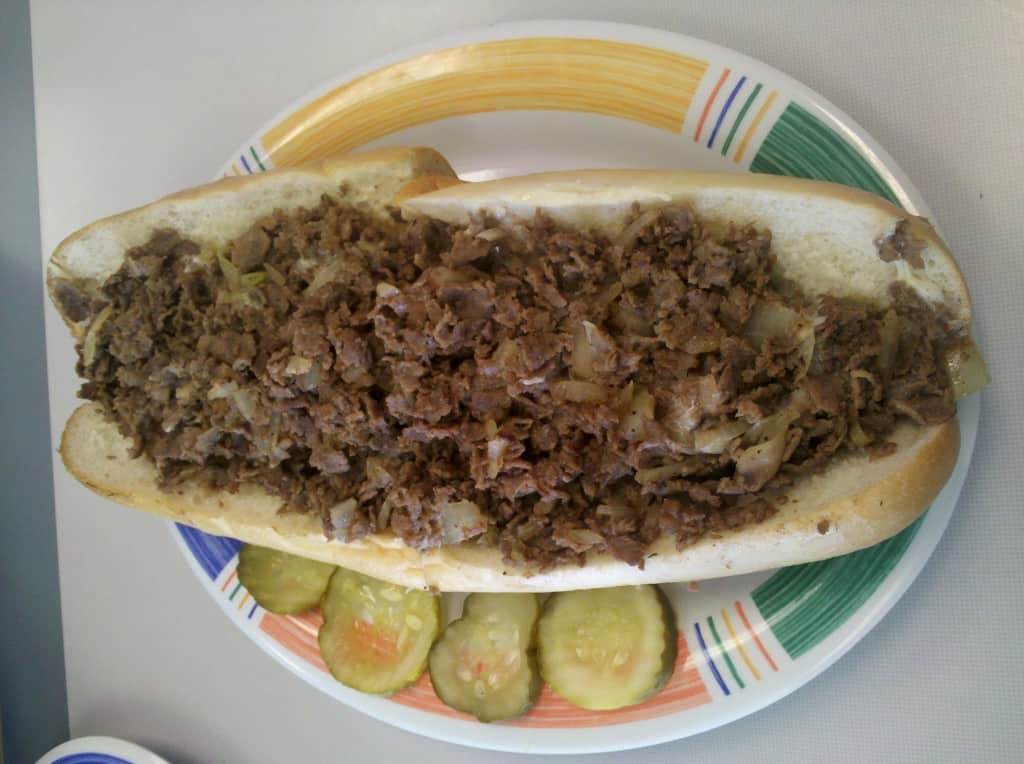 Queue the ring cards, come to the center of the ring, tap gloves round two is about to begin!  Today’s match up is Pat’s Pizzeria vs. Capriotti’s, the battle of two Delaware powerhouses. Will they both show up for this epic battle? Our first stop of the day was Pat’s Pizzeria. Going back for round two proved at first to be a little difficult. Sean and I already had it set in our minds who had the better cheese steak based off of the first round, but the beauty of this challenge is that any given day, any given cook can make or break a cheese steak. To help offset the decision I brought along my soon to be if he doesn’t run away before the wedding Brother-in-law Chuck. I placed the order at Pat’s (American with fried onions) as Sean located a place for us to sit.

The Steak took about 10 minutes to get to us as it was made to order. The first thing I noticed was that there wasn’t as much meat on this steak as there was on the last one. The roll looked different (thicker) and the cheese wasn’t melted this time. It looks like they cooked the steak placed the cheese on the roll then placed the steak on. Now what stuck out the most from our last visit were the peppery and the “MYSTERY” taste. I was hoping they weren’t going to make reappearance. Upon the first bite the meat wasn’t as hot as last time, I didn’t get a blast of cheese or onion; I also wasn’t overwhelmed by a peppery or mystery taste. The taste of the meat was ok but at no point was I wowed by the sandwich. However there was a profound change since our last visit, I wasn’t as turned off from this cheese steak as I was from the last one and they seemed to use a different roll. It looked thicker held the meat better and was meatier. The overall taste of the cheese steak was just ok and nothing jumped out at me to separate it from the rest of the field. It was good to see that the consistency of the sandwich can change from each visit; I wonder how Capriotti’s will fare???? 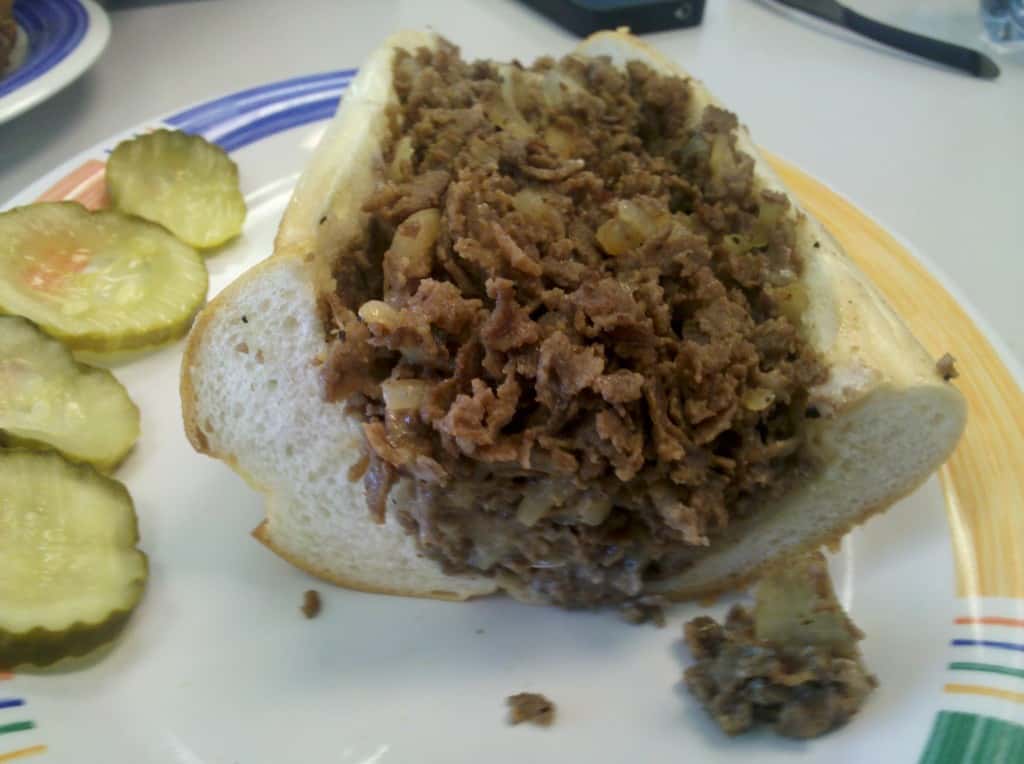 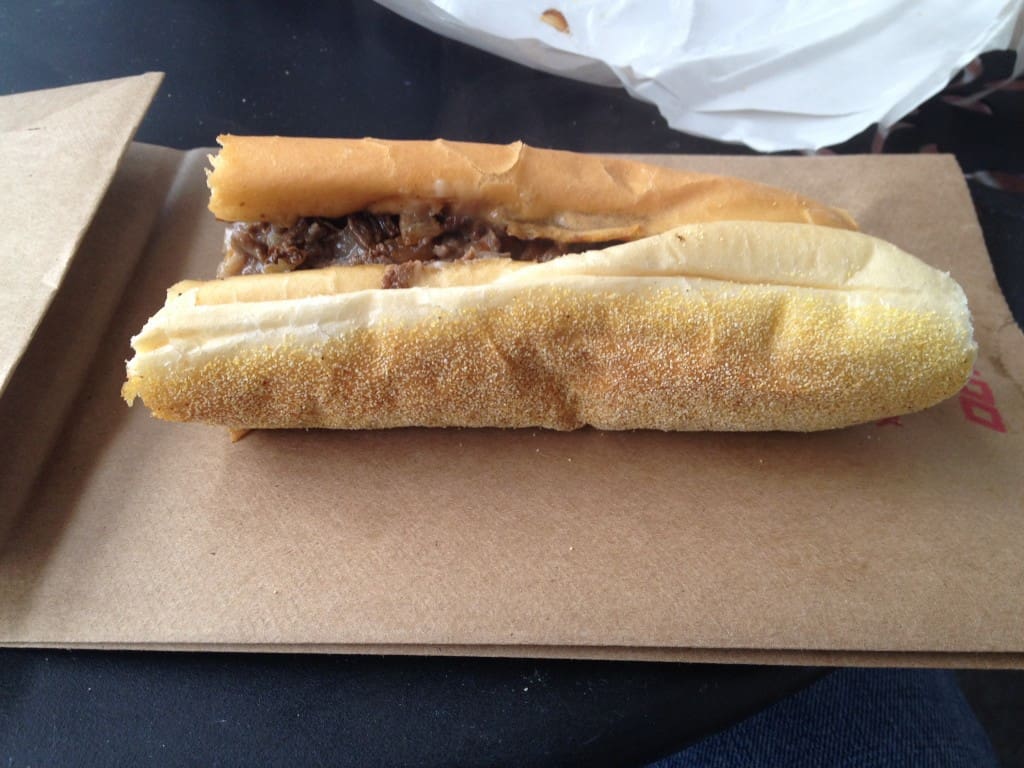 I can’t tell you the last time I ate a cheesesteak, and I was feeling anxious. I had just devoured the Pat’s cheesesteak and I was definitely not satisfied. I figured that after Capriotti’s first round win, Chris and I were going to be in for at least one good cheesesteak before the day was through. We arrived at Cap’s and I placed our order. The day was cool, and Chris grabbed us the only table outside. There is only two tables…one inside and one out. The steak was cooked to order as usual. Things went a bit sideways for a minute when we sat down. Chris and I are sitting at the table and an attractive girl walks past. Chris and I were too busy talking about cheesesteaks, but being men, we did manage to glance at her as she strolled past. Some random dude walks up to us and begins to explain his theories on marriage and why they never last. Now, I would really love to put the whole conversation here in text for everyone to read, but first….I would have to start with a picture of this random “Dr. Love”, and since I don’t have one, I am just going to skip the whole conversation. The advice from “Dr Love” …. Never ever get married! I will sum the fifteen minute conversation up like that. Chris and I are married (not to each other) with lots of kids, so we would respectfully disagree.

Anyway, back to cheesesteaks…..I go grab it from the counter and we dig in. The steak had a similar appearance as last time…. Medium chopped steak, cheese and onion melted throughout, on a roll that they bake themselves every morning. At first bite, I was mildly disappointed. Their sandwich is a good solid steak. Every part of it is good, but on this day, having been steak deprived for such a long period of time….I was looking for excellence. I wanted a steak that I could get excited about, something that would make me throw out a few curse words (which really isn’t that hard to do). This steak was good, but I didn’t get very excited about it. If you are in the area and are looking for a solid steak, Cap’s has got it, but I am not sure how much farther it is going to make it in this competition. Chris and I agreed that Cap’s definitely beat out Pat’s, but not by as large of a margin as we had anticipated. 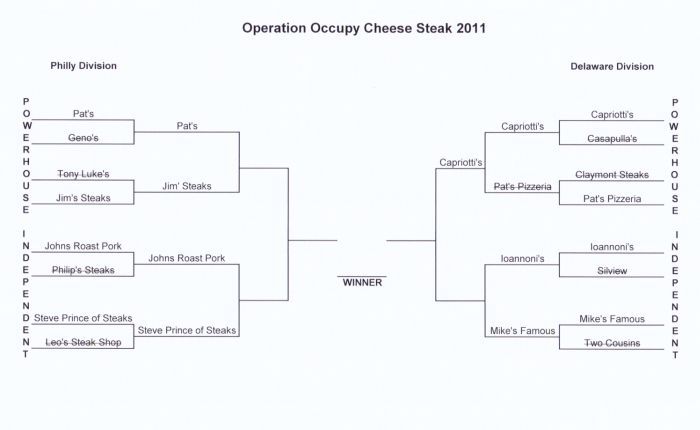 Was hoping for a stronger win from Caps. Who know's what the next round will bring!