Your friends will never guess the secret ingredient in this smooth and rich ice cream! Spiked Potato and Huckleberry Swirl Ice Cream is a fun creative twist with purple fingerling potatoes as the base and a kick from huckleberry flavored potato vodka!

Did you know that Idaho celebrates New Year's Eve with a Potato Drop?

How about that Idaho is the top producing state for potatoes in any form, and for fresh potatoes.

Idaho grows potatoes on 325,000 acres of farmland, producing 13 plus billion of pounds of potatoes annually.

And there Idaho Potato Truck is making it's way through the country escorting the national Christmas tree this year? See the schedule for when it rolls through your town!

I recently shared my ode to Idaho, a sweet potato and huckleberry cocktail that I dreamed up while cruising through the state with the Idaho Potato Commission. The best part about this tour, though, was the individuals. The people of the tour is truly what made the trip amazing. I just met the crew of the IPC this year and within minutes we were exchanging stories about bicycles and swapping pictures of pets. I stopped and listened to an amazing story about Project PB & J, a serious food initiative put together through Which Wich, donating the classic PB&J to those in need. We didn't talk too much about the business of potatoes at all. We were having too much fun just talking about life.

Today, we are rallying that community, the friends we have met along the way to celebrate the head honcho's big dad! It's Dr. Potato's Birthday! Dr. Potato is the gent who filled me in on all those potato facts up top and who wrangles the bloggers for the Harvest Tour. He's a solid fellow with an amazing lady and an adorable pup.

While we were in Idaho, Don told us about a place that made potato ice cream. Immediately, I got to think about what that must be like. I wanted to know if it was a base or a flavor. Then I wanted to make an ice cream that was both! This ice cream started with purple fingerling potatoes, then a custard base. Infused with huckleberry vodka and a swirl of huckleberry jam to bring all the flavors of Idaho together. It came out super smooth and rich. Topped with a drizzle of caramel this became the perfect birthday ice cream! 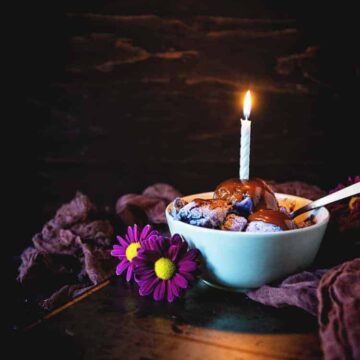