Snickers cupcakes are everything you would expect in a sweet dessert. Moist chocolate cupcakes stuffed with caramel and Snickers candy bars. What's not to love? 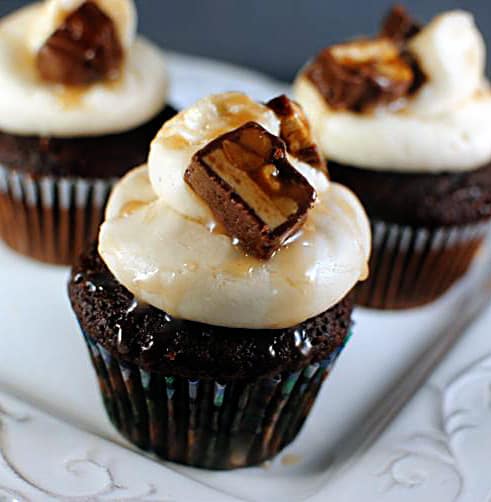 Want to know a secret? I don't really like sweets. I prefer meat and vegetables over cupcakes and candy, despite what this blog may lead you to believe. So, why all the baked goods? They are fun to work with, kind of like a challenge to get better and learn something.

Cooking you can play around with, make spur of the moment changes, throw ranch dressing into a pile of mashed potatoes, and everything will work out fine. Baking, sure you can change something, but it’s more of a calculated risk. I’d like to become more educated and skilled with baking so that it becomes less of a risk and more of an educated decision.

I saw this Snickers cupcakes recipe and really wanted to make them. Snickers in a cupcake – hells and yeah, but I think my favorite part is just the untouched cupcake. The chocolate cupcake base here is delicious and moist. It may become my go-to chocolate cupcake recipe.

For the caramel sauce:

In a medium saucepan, combine the butter and the sugar over medium heat. Heat, stirring occasionally to combine, until the butter is melted. Remove the mixture from the heat and transfer to the bowl of an electric mixer fitted with a paddle attachment. Beat on medium-low speed, 4-5 minutes, until the mixture is cooled. Mix in the eggs and egg yolk, one at a time, scraping down the sides of the bowl as needed and beating well after each addition. Mix in the vanilla and then the cocoa mixture and beat until incorporated. With the mixer on low speed add in the dry ingredients in two batches, alternating with the sour cream, beating just until combined.

Divide the batter between the prepared cupcake liners, filling them about ¾ of the way full. Bake 18-20 minutes or until a toothpick inserted in the center comes out clean, rotating the pans halfway through baking. Allow the cupcakes to cool in the pan 5-10 minutes, then transfer to a wire rack to cool completely.

To make the caramel sauce, melt the butter in a heavy-bottomed saucepan over medium heat. Add the sugar and cook, stirring occasionally, until the sugar begins to foam a bit. It will look and smell like it’s on the verge of burning. Remove from the heat and add the heavy cream. Stir until the sauce is smooth (you may need to return it to the heat to smooth it out), then mix in the vanilla and salt. Let cool. (This can be stored in the refrigerator for up to 2 weeks.)

To fill the cupcakes, cut a cone out of the center of each cupcake with a paring knife.

To make the filling, combine the chopped Snickers bars in a bowl with ⅓-½ cup of the caramel sauce, and mix to coat.

Drop a spoonful of the filling mixture into each cupcake.

To make the frosting, add the butter to the bowl of an electric mixer.  Beat on medium-high speed 1 minute until smooth.  Blend in the confectioners’ sugar until smooth, 1-2 minutes.  Mix in the vanilla, caramel sauce and salt until incorporated.  (Note: the caramel sauce should be just warm enough that it is workable, but not warm enough to melt the butter in the frosting.)  Add the heavy cream and whip on high speed until light and fluffy, about 3-4 minutes.

Transfer the frosting to a pastry bag fitted with a decorative tip.  Drizzle the frosted cupcakes with additional caramel sauce and garnish with chopped Snickers bars. 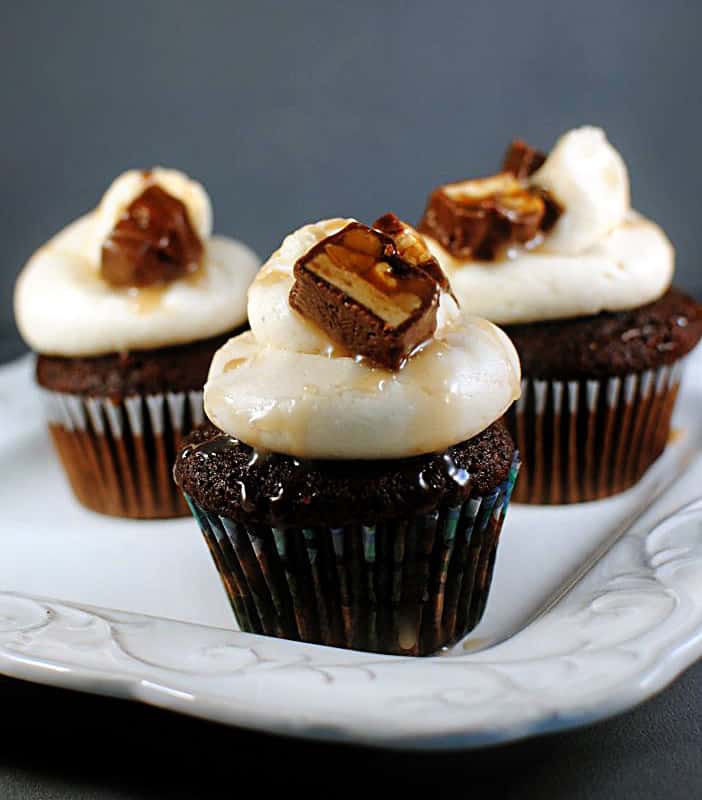 Good luck trying to keep the candy bars as a topping on these Snickers cupcakes because if anyone else is in the room, they are just going to go behind you and remove them from the top of the cupcakes. 😉

Because there is life beyond Snickers cupcakes, here are some other cupcakes recipes you might want to bake up:

{Not So} Hi-Hat Cupcakes