Apple cinnamon crumble is the perfect fall dessert! Juicy apples, warm spices, and a crumble topping, with a scoop of vanilla ice cream and caramel to sweeten the pot.

It's that time again! I have made it to my second month of active participation in a 'club'. It's called the Secret Recipe Club, where you are assigned a secret mission to be a ninja all over someone else's blog, get to know them, check things out and pick a recipe and let it shine to the world. (Seriously, I would join any club where I got to be a secret ninja).

This month I was given Searching for Spice, Corina's blog about trying new recipes. The site has tons of very diverse recipes, some even inspired by Top Chef challenges. How cool is that? I would never have the guts to tackle a lot of the challenges on Top Chef.

Since I've been all into Fall recipes, scents, apples and socks I chose to highlight this apple cinnamon crumble. 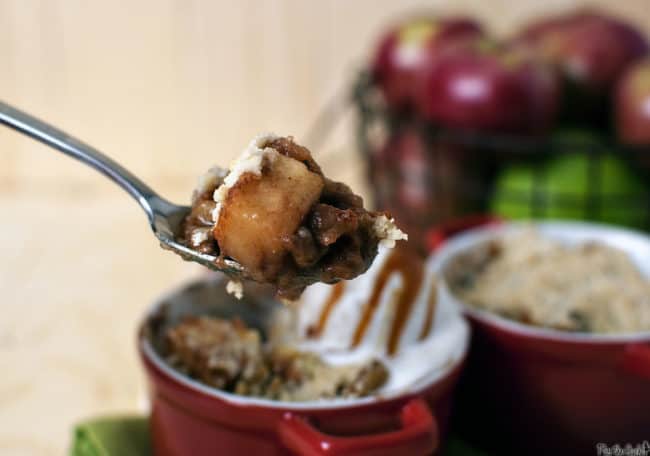 Peel, core, and dice the apples into ⅓ to ½ inch pieces. Put them a saucepan with the water. Sprinkle with the cinnamon, stir in  to coat the apples. Mix in the raisins and walnuts. Cook for about 10 minutes, stirring occasionally. (You're going for fork tender apples here).

Make the crumble topping by rubbing the butter, flour, and brown sugar with a dough blender or fork. When it has reached a sand like constancy you're good.

Put the apples into a small ovenproof dish or individual ramekins.   Cover heavily with the crumble mixture and bake in the oven for 20 minutes or until golden and bubbly. Let cool before handing this to small children - hate to have a molten apple incident.

Serve warm with custard or ice-cream and freshly grated nutmeg on top. 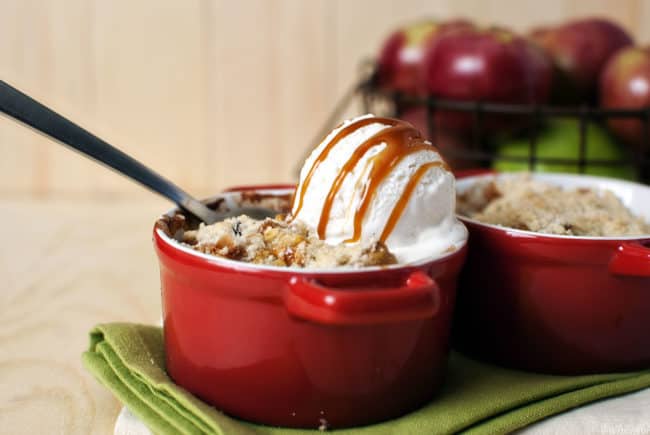