I bet you had just about written our little cheese steak debate off for good. But the boys are back, after a few weeks of training and down time, and they're hungry! This week's challenge is a hard one, because a good customer of mine is a loyal employee of one of the shops involved and I was worried about the outcome. I wanted to let him know we are featuring them, but didn't want to unless the results were good. Lucky me, things looked like they turned out. Read ahead and get ready for some major cheese steak cravings!

Remember, there are rules for the Great Cheese Steak Debate:

It has been a few weeks since our last review so Chris and I were excited to get back to business and eat some cheese steak. Two Cousins was a late arrival to this competition after we found that Cleveland Avenue Sub Shop had closed its doors. We needed a replacement and had heard good things around the office about Two Cousins Pizzaria. I had been there one time several months ago and enjoyed an Italian Roast Beef sub that was excellent. Chris and I met at the shop which is located at the end of a small strip mall. The shop was pretty much empty, snow had just started to fall and the day was cold. 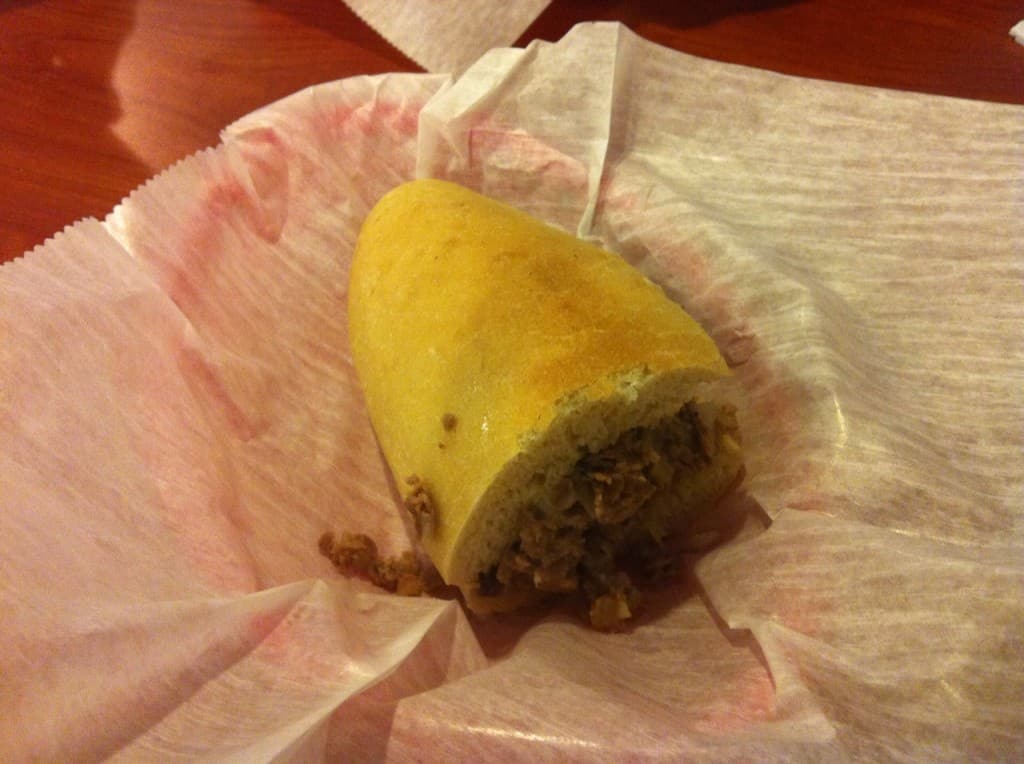 Chris ordered our standard cheese steak....American cheese with fried onions. A short time later the sandwich was brought to our booth. It arrived in a red plastic basket with white paper. Chris and I looked at each other with a bit of surprise, the roll was different. Two Cousins makes their own focaccia rolls. The roll was smaller than average, compared to the other shops that we have visited, and the steak quantity left a bit to be desired. The onions were mixed in and the American cheese appeared to have been melted on top of the steak before being placed on the roll. 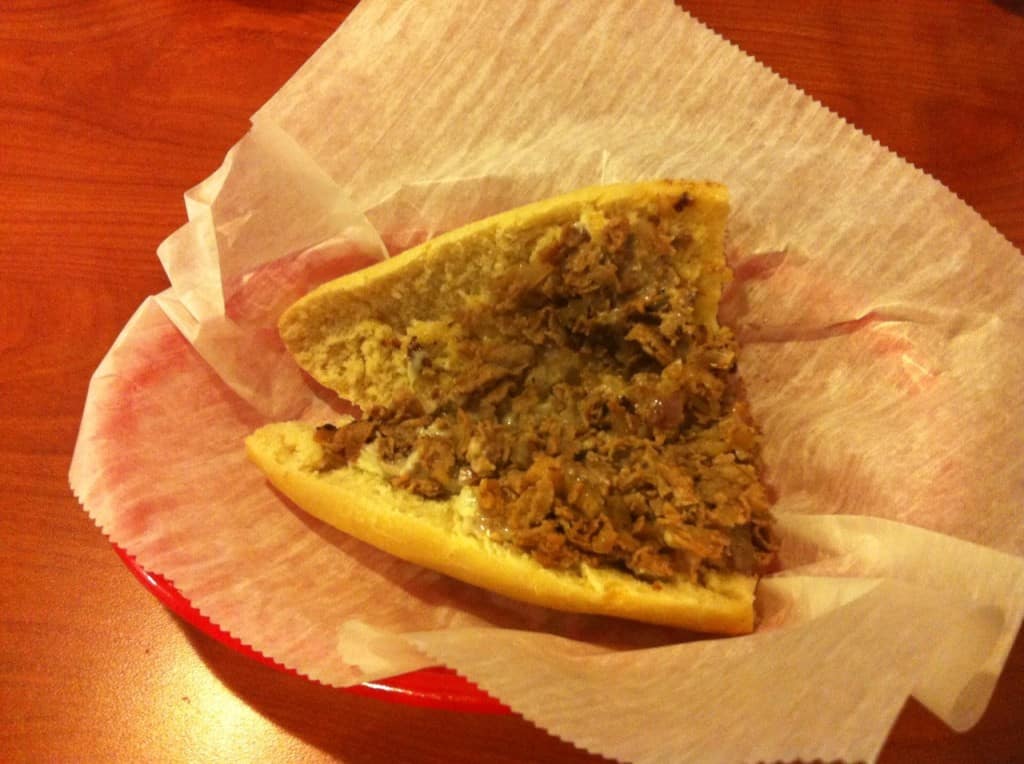 At first bite, I was not really sure what to think. The roll did not impress me right away. This was the first time that I have had this type of roll with a cheese steak. As I took bite after bite, I felt the disappointment set in. It wasn't bad, but it was not the cheese steak that I was hoping for. Chris and I had recently talked about the fact that we can now distinguish by taste, if a shop is using quality steak or not. There are several different grades, and this shop was using what Chris and I have deemed "the average steak".

So to summarize, the cheese steak here was ok in every category. The roll was ok, the cheese was ok, the meat was ok, but who wants a cheese steak that is just ok....we are on the hunt for cheese steak greatness and reality is starting to set in. This hunt has become a bit more difficult than we first anticipated. We are on a mission and we're not gonna let you guys down, we will find the best cheese steak in Delaware and Philly, and there can be only one winner.

Our second stop of the day brought us to Mike’s Famous Steaks and Subs in the outskirts of Newark. If you have lived in Delaware for any length of time you have heard of Mike’s Famous, but most likely never eaten there. Everyone that I talked to said “yeah I’ve heard of that place, been meaning to try it,
but never had a chance”. Well today was our chance. The shop is small and is located in a small strip mall and if you drive too fast you may ride right on past.

The shop was empty when we got there but the staff was very friendly and inviting. Sean placed our order, a large 12” Cheese Steak with American cheese and onions. We set up shop in a corner table and watched as a worker took out a bunch of Serpe boxes. Sean and I looked at each other and said “they use Serpe rolls”. That’s a plus one in our book. The steak took about 5 mins to hit our table.

The steak looked very good and pretty hearty. The first bite was a hot one, filled with steak and a hint of onion but not much cheese and that was pretty status quo throughout the rest of the sandwich. The steak had a nice even flavor and the onions were cooked to complement the steak. At the end it was a good cheese steak, but not a great steak.

However, today it was enough for Mike's Steaks cheese steak to move into the second round. 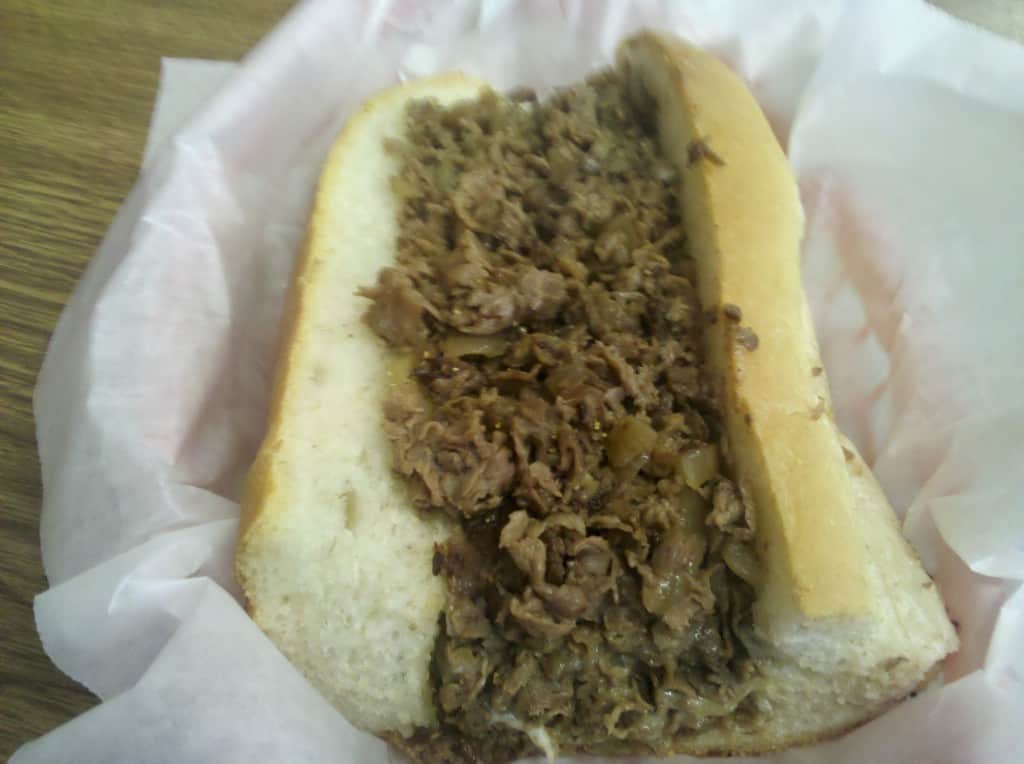 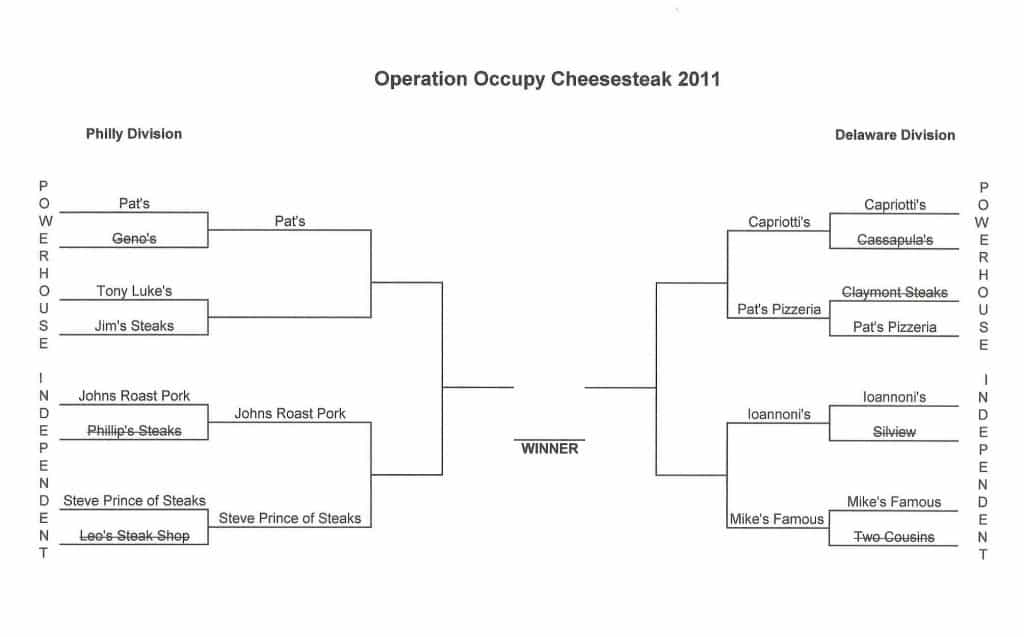 I told you he was a good customer - and sure enough, he was standing right here and I was reading Chris and Sean's reviews. I'm so happy I don't have to slink away and can tell him his shop won!

Join us next round as things really start to get down to business in determining the best cheese steak in the area!