The boys are back after a long hiatus for some real deal cheese steak lovin. They are taking it home to Tony Luke's and Jim's this week to see who can bring the beef and wiz in these two landmark Philly steak shops. So get your appetite ready and let's see who can be called the champ - for this round!

Oh snap it’s back after a long hiatus to finish up round one with two awesome Philly cheese steak shops!!! The first stop of the day was Tony Luke’s. Now I’ve heard a lot about Tony Luke’s, from friends, Co-workers and Man vs. Food! A lot of people I know swear by the steaks that are pumped out of this shop on a daily basis, well we’re on our way to find out. The inside of the shop reminds me of a diner with a few tables scattered throughout. I place the order (Wiz Wit) and Sean picks out a table so we can set up shop. The steak took about 10 minutes to cook, made to order. I wanted to check out the cooking process but the cooks were elevated so I couldn’t get a look at what was going on in the kitchen. When we got our steaks I noticed right away that it was packed with meat, cheese and onions. Upon first bite everything seemed to blend perfectly, except the roll. They use a sour dough type of roll that threw the taste and enjoyment of the sandwich off just a little. The Cheese Wiz also lacked the bite or sharpness that I have grown to love from the wiz. The
meat however was extremely flavorful and the onions were cooked to perfection. It felt good getting back to the grind and into the shops. We’re heading to Jim’s Steaks next and then onto round two!! 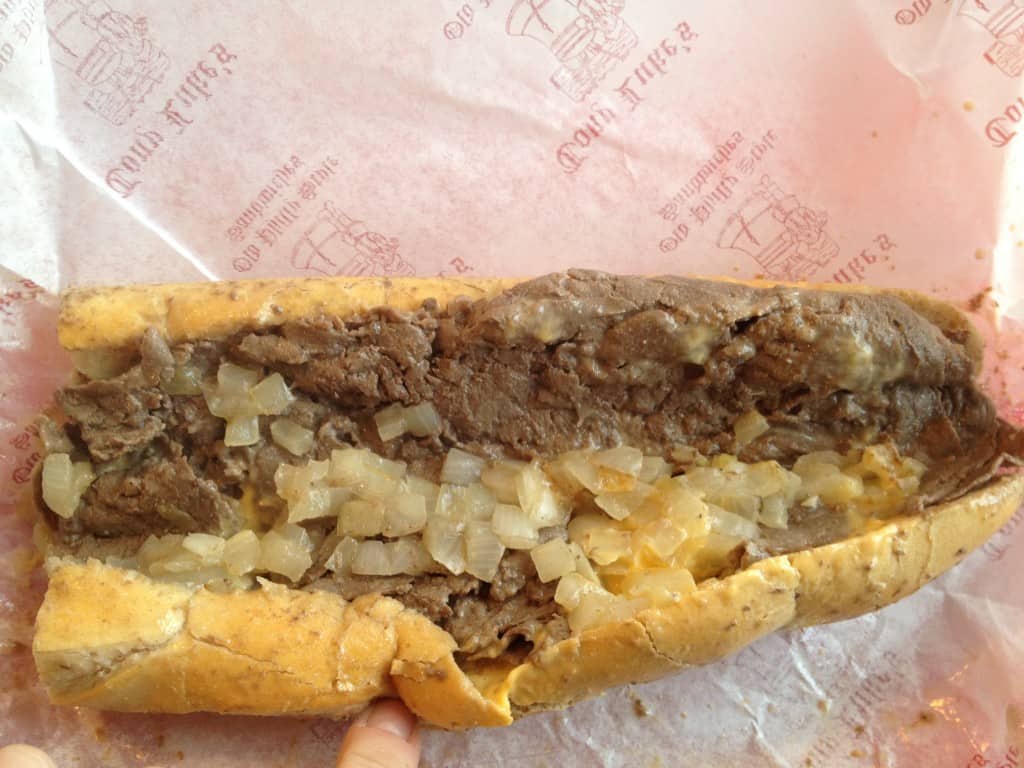 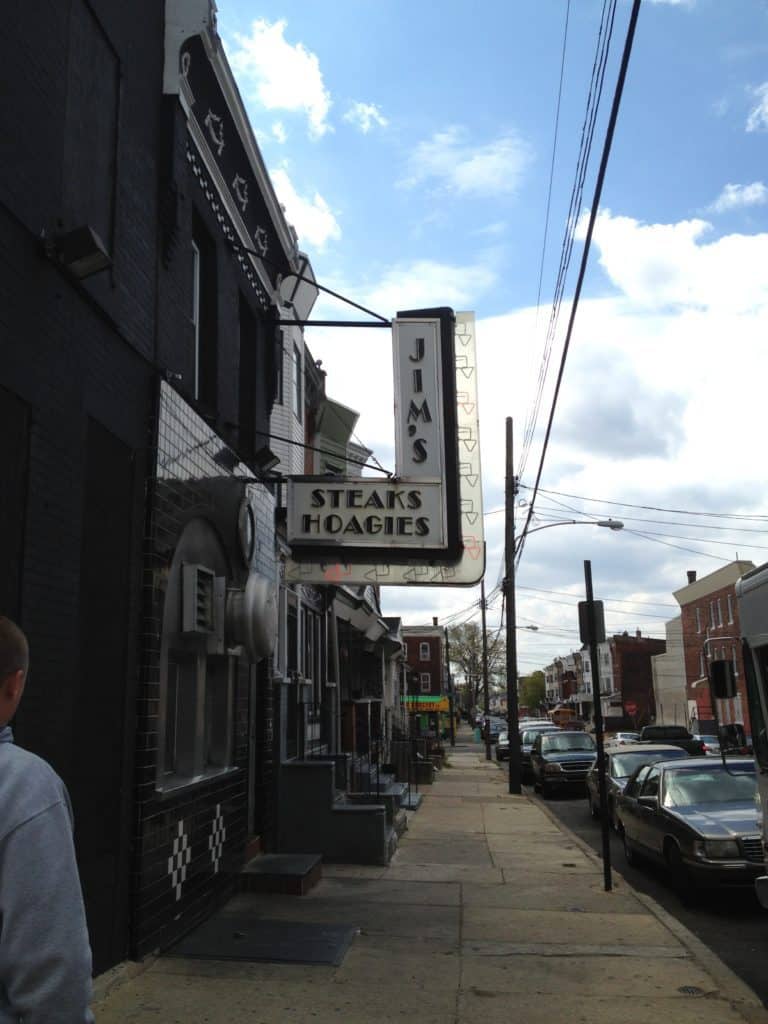 We had just left Tony Luke's and I was thinking "stay open minded, stay open minded".  You see, I have eaten at Tony Luke's a few times, and have always been impressed with their steaks.  I am not sure if it was the fact that I was starving to death when we arrived or if TL's was having an extra great steak day, but man.....that was good and I wasn't sure anything was going to be able to compete.  We set the GPS and headed over to Jim's Steaks.

Most people think of South St. when you mention Jim's Steaks, but that is not the original, and staying true to CSC (cheesesteak competition) rules, means heading to West Philly for an original Jim's steak.  When we arrived, Chris and I looked at each other like, I hope the truck is here when we get back.  Chris had been to Jim's on South St on two occasions (in one night), so to say he was a fan, would be an understatement.  I was glad that Chris had been there, because when I first walked in, I thought to myself....I wonder if South St has become the money maker for this establishment and the owners had forgotten about the West Philly locations so to speak.

We ordered our steaks, wiz wit, of course, and watched as the cook went to work.  I noticed immediately that the cook, placed our rolls in an oven....a toasted roll.  The large can of wiz was right next to the grill, and the onions were cooked separately.  Chris told me that the cook was preparing our steaks just as the cook did his on South St.  I thought this was pretty cool, consistency between the two locations is important, to me it says the owners take pride in their food preparation methods.  The cook finished our steak.  Chris and I sat down at the counter against the wall and dug in.

The first thing that hit me was the wiz....the taste was much stronger than the wiz we just had at Tony Luke's.  The steak was good, medium chopped and the onions were noticeable, but not a strong part of the sandwich.   After each bite, I became more undecided about which shop would prevail in this round.  I was still undecided as we left.  Chris and I began to discuss the steaks in detail and it became clear to me that the sour dough roll of the Tony Luke's killed it for both of us.  It just took something away from the sandwich.  Jim's was a solid performer, definately a great steak.  I didn't walk away blown away by one particular part of the steak, but all aspects were very good.  In this round this was just enough to take down TL's and move to round two. 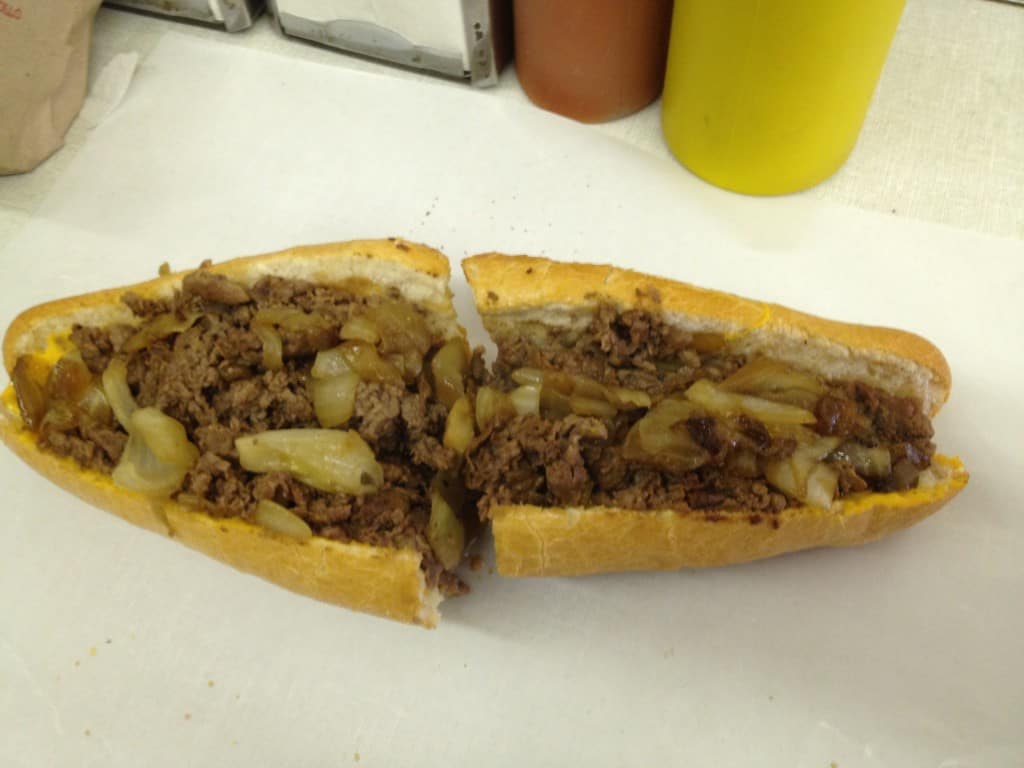 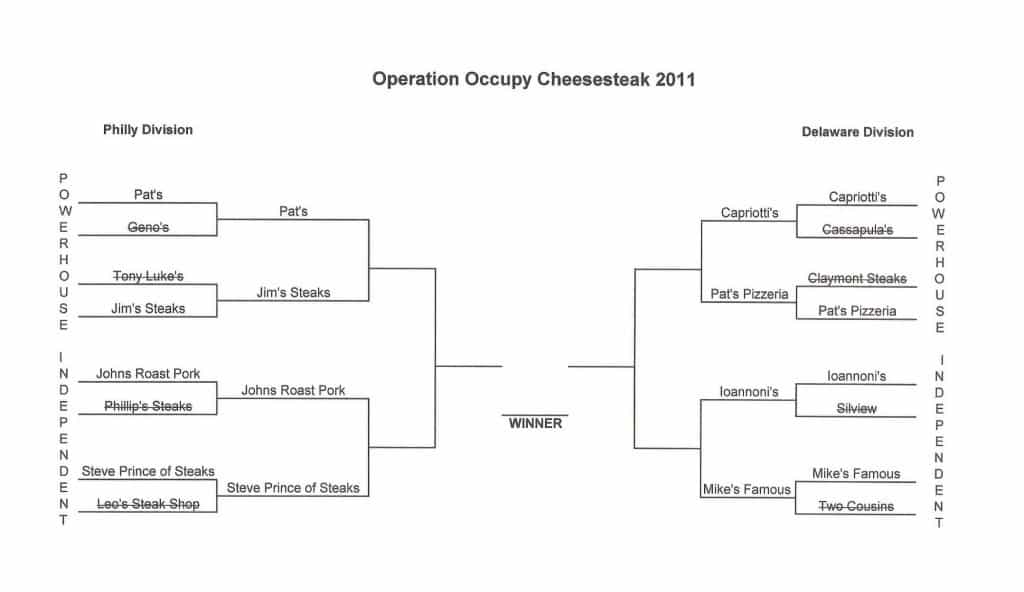 My favorite, Jim's won this round! Check back next week as we really start to narrow things down. 😉