I know its been a few weeks since our last Cheese Steak challenge, but don't worry, they aren't a thing of the past. We are all anxiously awaiting the final throwdown between Philly and DE shops. I haven't been lucky enough to sneak a trip in myself with the guys yet but I am hoping to as things go on because seriously, if you aren't drooling with anticipation at this point, clearly this page isn't for you.

So let's get down to business. 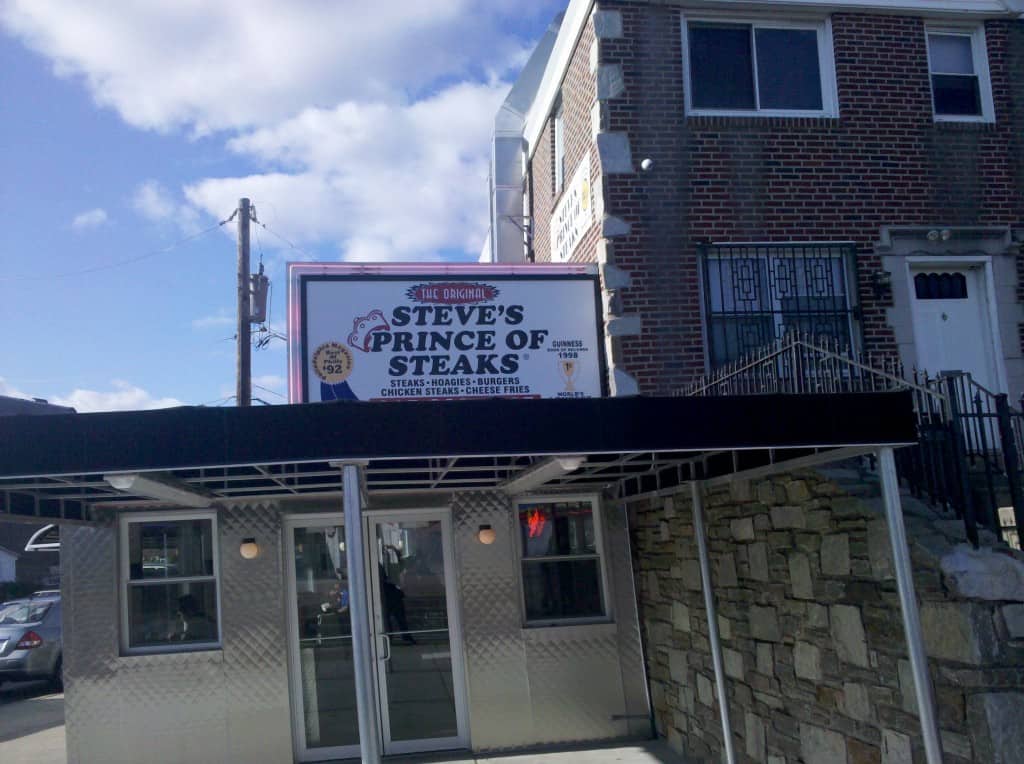 We’re back in Philly for round 6 of our challenge and this time we brought along a friend. Brian, was the one who recommend Steve’s to us for our challenge, as a matter of fact he swore that Steve’s was the best cheese steak joint hands down.

Now to be fair Brian grew up right down the street from Steve’s so he was biased (I love that word), let’s see if his over whelming admiration for Steve’s lives up to his hype. When we arrived, Sean and I decided to take a back seat and let our guest judge place our order, Wiz.

Wit, Brian even paid in a sad attempt to sway our decision towards Steve’s. The Steak took about 15 minutes to get to our table (the place was packed) and they cooked their steak in a unique way. There were two people working the grill one cooker and one placer of the meat on the grill. The steak was sliced very thin in about a 5x4 rectangle (I had to bust out my ruler for this one). There was no chopitty chop of the steak here, and there was no need to. 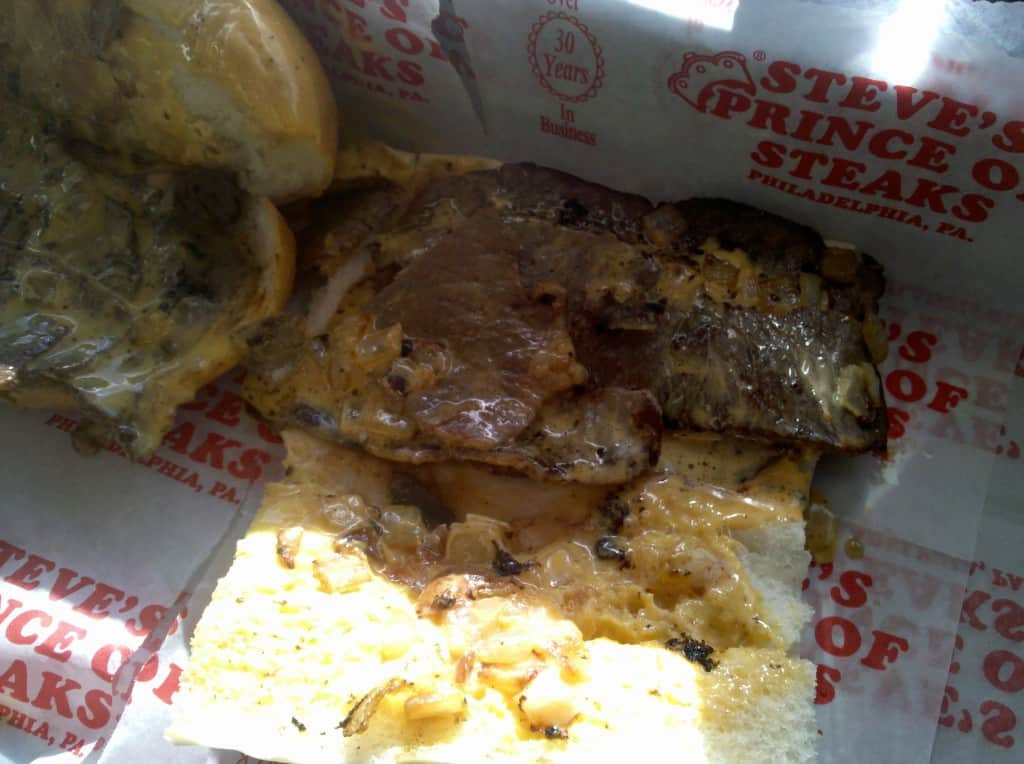 Our steak made it to our table and during the unwrapping process we noticed that the roll had a nice golden brown tint to it, I couldn’t wait to take a bite. I opened the roll and was blinded by the light of the beautiful cheese wiz!!!

The onions were mixed in nicely and cooked to a golden brown, with just a touch of char on the sides. I decided to go in and take a bite and what a beautiful bite it was. The meat and wiz was extremely flavorful and the onions did what onions are supposed to do, adding a complexity to the sandwich.

I looked over at Brian and he had a HUGE smirk on his face as he said to himself “yeah I picked this winner”. But hold on Brian, the first bite was wonderful but the deeper I got into the sandwich I found myself asking “where’s the beef”??

Everything was spot on for this sandwich but they severely lacked on the quantity of beef that they put into each sandwich and for me that’s a big deal. The sandwich was a little doughy because of the lack of beef. Maybe Steve’s wanted you to pay extra for extra steak, but since it’s not part of our rules we had to stay with what they offered. We left Steve’s happy….mainly because we had more cheese steaks to eat.

We piled into Brian’s ManRover (his Honda CRV) and headed to Leo’s for the second half of the Great Cheese Steak challenge. 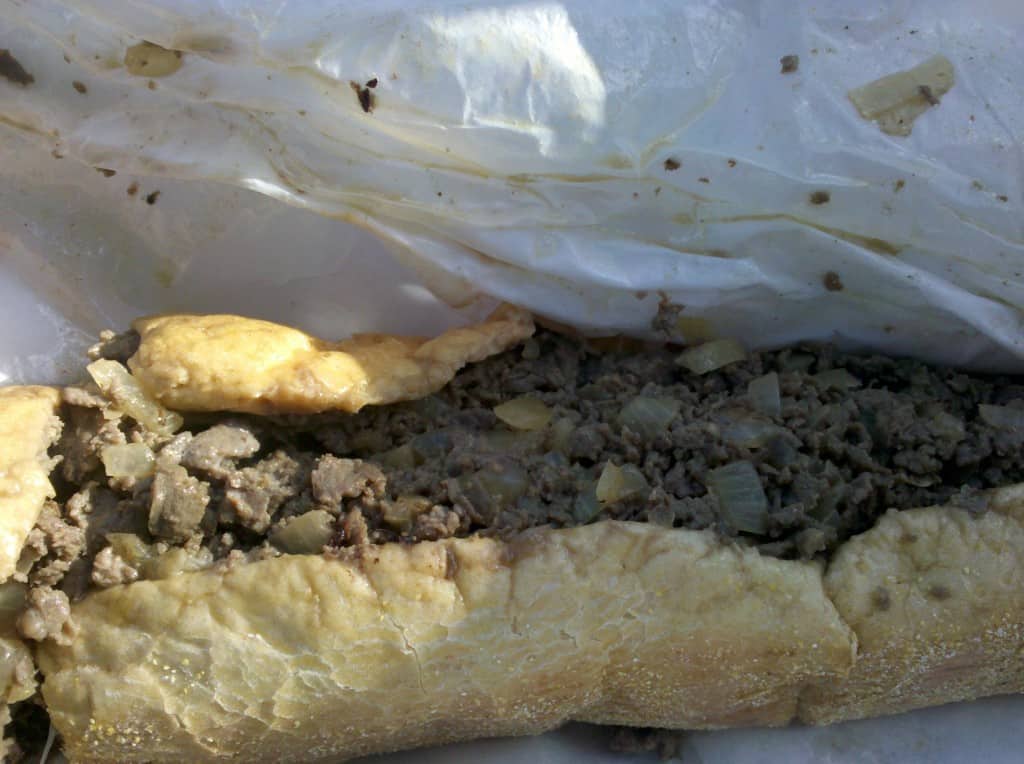 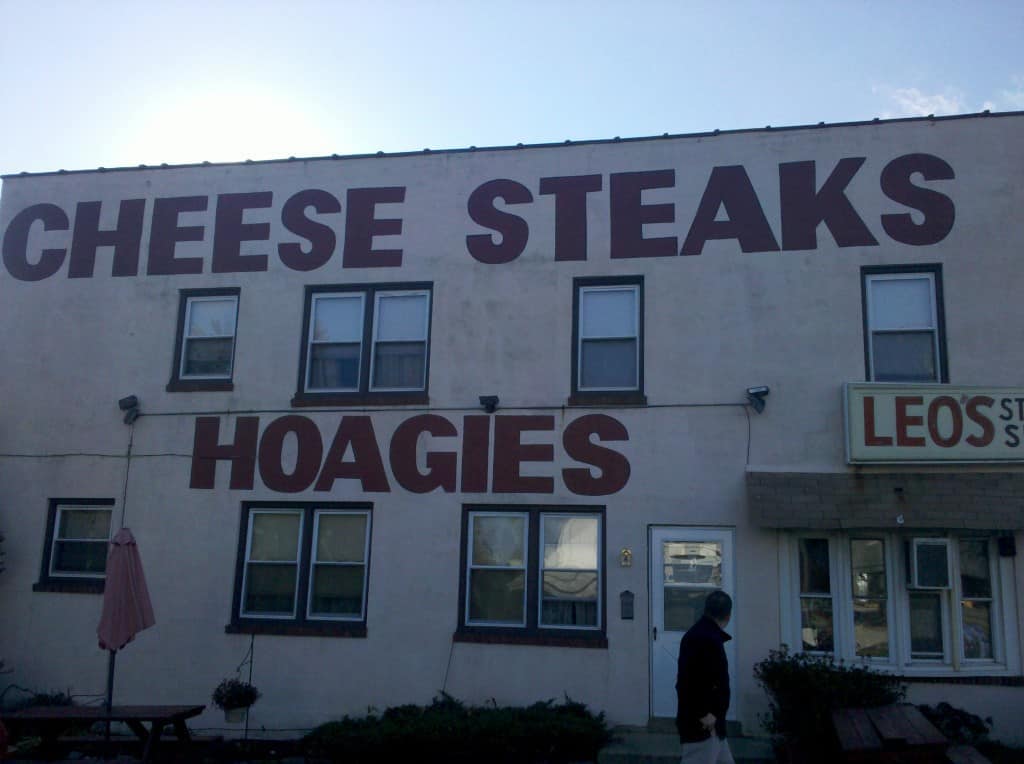 We arrived at Leo’s and I threw our order in. The large steak at this place is 18 inches long. We decided to go with a large and split it three ways since Brian was going to stick it out for another cheese steak. I watched the cook throw this monstrosity on the grill and I began to smile. There was enough steak there to make four steaks from Steve’s. I tried to order Wiz, but struck out….so we ended up with a large American wit.

While waiting I read several citations and awards on the walls from local newspapers and magazines commending Leo’s for cheese steak greatness. The steak was ready in about 10 minutes. There are tables out front, however since it was so cold and windy we made a group decision to eat in the car parked right out front. We jumped in Brian’s Manrover and tore into our steaks.

First thing first…the steak looked great. It was mounding with steak and was so full that steak was falling out over top of the roll. The cheese was melted throughout and the onions were plentiful. I took my first bite and found out that it was hot….so hot that I burned my mouth. I was so excited by the appearance of the steak that I couldn’t wait to take another bite. It was painfully hot, but I couldn’t wait for it to cool down. So even though it looked good, I started to realize that looks can be deceiving. The steak was not very tasteful, but the roll, the cheese, and the onions, were all great. We seemed to be having steak issues during this round. 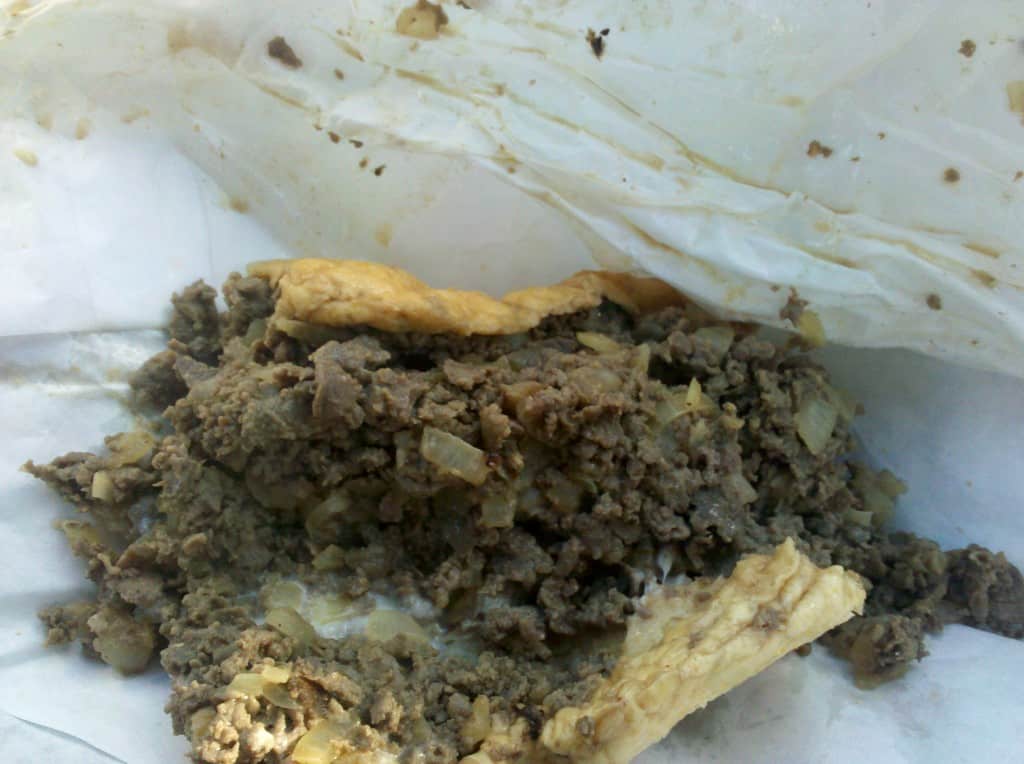 Steve’s steak was really good, but definitely lacked steak. Leo’s had a ton of steak, but lacked taste.

I should throw out there that since the day we had the cheese steaks and today I have received about five phone calls from Brian. He seems to think that Chris and I hid a cheese steak in his brand new car, causing a smell that Brian describes as “rotten vomit steak”. Brian if you’re reading this, check under the rear passenger seat.

A sad cheese steak debate day for our hungry team: 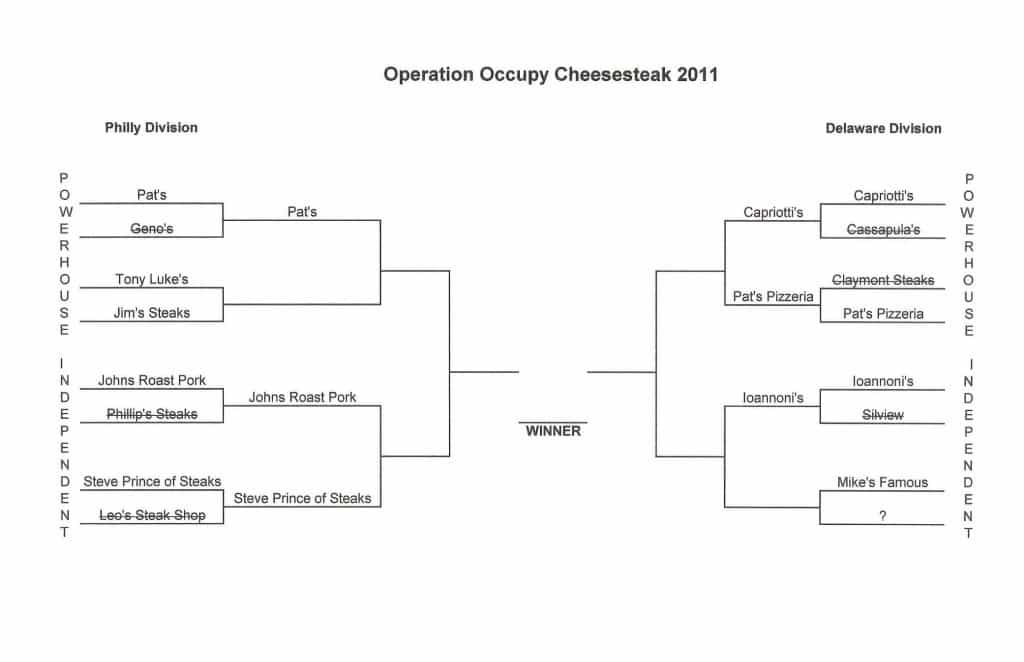