It's another round of the Great Cheese Steak Debate, taking place on the streets of Philly this week. John's Roast Pork versus Philip's Steaks - Two steak shops I've never been to. But I can tell you that if I don't get one soon, there will be one hungry Kita to answer to!

Lets get the party started:

but remember, play by the rules: 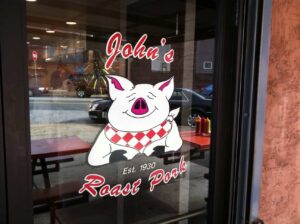 Home of the “Ultimate Cheese steak”

Wow, I saw these comments on John’s Roast Pork home page before heading out for our weekly cheese steak challenge. HUGE expectations were on the horizon, but I was determined to go into it with an open mind and stomach. We set out to the little shack on the corner of Weccacoe and Snyder Ave that are known for their Roast Pork sandwiches but are slowly gaining notoriety for their cheese steaks.

When we arrived I sat down outside on a red picnic bench with the vibrant view and a loud hiss of a factory located directly across the street from John’s Roast Pork. Sean went inside to order our cheese steak, the usual; however this PHILLY cheese steak shop doesn’t serve Wiz. Wait a minute no wiz on a Philly cheese steak in Philly? Is that aloud? Is that even legal within the city limits? So Sean ordered up an American Wit (a cheese steak with American cheese and sautéed onions) instead, the steak was made to order and took about 15 mins (there was a line) to reach our table. 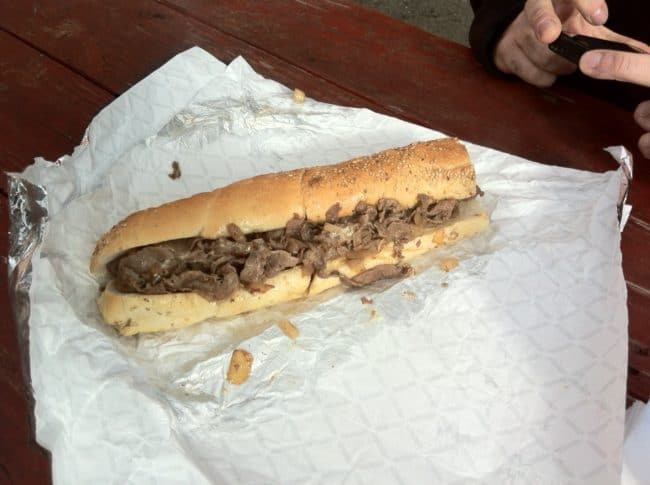 Upon unwrapping the cheese steak sandwich, I noticed that they use a sesame roll.

Hmmm... will it hurt the sandwich or add another complexity to it? The first bite into the sandwich was a flavorful explosion of cheese, steak, onion and a little something nutty (I’m not talking about Sean either)!! The roll was thick and the sesame seeds added nuttiness and an oiliness that imparted a little bit of a bitter taste to the sandwich which was good and unique. The meat was loaded on the sandwich and was medium chopped; John’s used just the right amount of onions and cheese in a perfect balance.

This cheese steak left me wanting more when I was finished and I would recommend John’s to anyone looking for a good cheese steak, but get there early, they only stay open till 3pm M-F or when they run out of rolls whichever comes first. As for the accolades at the top of the page; we have a lot of cheese steak eating in our future before we can proclaim who has the best, but I see this little cheese steak shack giving the big dogs a run for their money!! 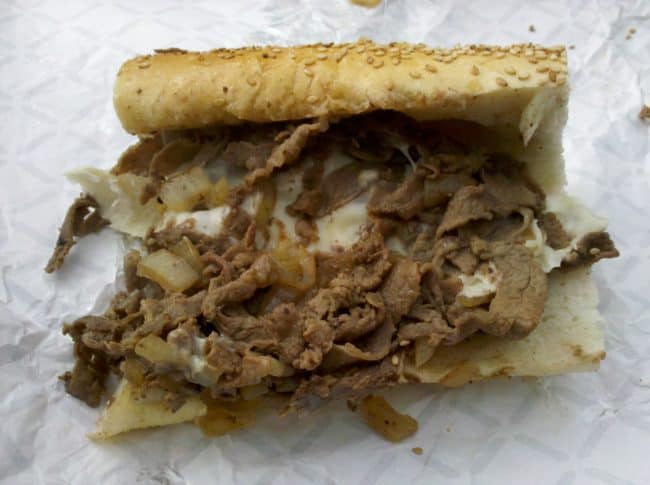 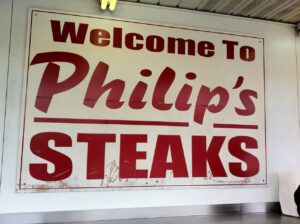 Chris and I had just left John’s and headed up Passyunk Ave to Philip’s. We anticipated a good match up….after all, this place had come up numerous times during the selection process. Chris and I had never been to Philip’s or even heard of it prior to the start of the competition. When we arrived we found a corner store that had the two window setup similar to Geno’s. Steaks served at one window, fries and drinks at the other. It was cold and overcast that day, but we had steaks to eat. Chris ordered the steak and after about 10 minutes, we were ready to go.

This steak also had meat that I would describe as a “medium chop”, right in between finely chopped and not chopping at all. The roll appeared standard, nothing fancy, and the cheese was Philly style…..WIZ! Onions were sautéed. Did I forget to mention Wiz….. I was psyched about the wiz! 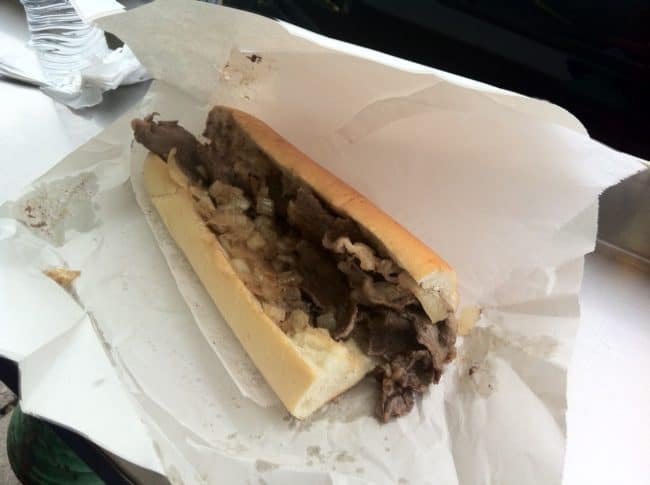 Now here’s where things get a bit strange….I bit into the cheese steak and thought, awwww man, this is going to be a tough decision, but after every bite I became less excited about it. It almost  became somewhat bland. I have no explanation for why it went downhill like that, but by the end of the steak I was not impressed. John’s was clearly the winner. Chris summed it up best when he said that he was left wanting another steak at John’s, I almost wanted to go back and get another one for the ride home.

I think we know who won this round...