Steak salad, served on a bed of spinach with sour cream potatoes is a an easy and delicious weeknight dinner.

You just can’t go wrong with meat and potatoes.

Some nights you just know you can cook. Tonight was one of those nights. Dinner was a steak salad with spinach and sour cream potatoes… simple, easy, healthy, and delicious. When I could smell it almost all coming together it didn’t matter if it would sound interesting to anyone else, take a good pic for the blog, or get me more followers. All that mattered is that I knew it would taste good, and it did. 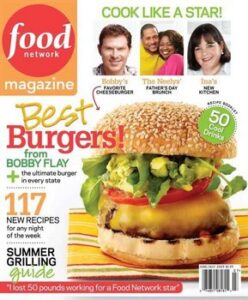 Tonight’s meal came fresh from the pages of the July/August issue of Food Network Magazine. I started getting Food Network Magazine when it first started getting published last year. It has surprisingly grown on me since its conception. I don’t go to it expecting long or informative articles, but quick snippets and ideas. The food looks good and, most of the time, relatively easy. I don’t like the “him vs her” section because having Sandra Lee compete against Emeril Lagasse is like having a staring contest with a cat. Some things you just can’t win. Sandra Lee Vs. Rachael Ray – ok, fair. Either of those two against a trained chef who has run a real restaurant (in most cases, several) – not even a challenge. Sure their version may be cute, homey and come with a tablescape, but I can tell you which one tastes better.
I love the page dedicated to copying a famous restaurants dish. That’s just plain fun. Who doesn’t love Cinnabon rolls enough to want the copycat secret recipe to that in their kitchen? The mini cookbooks included in each one have been cute too. I would never make everything listed, but it’s defiantly an idea shack. There are plenty of other features every month too like party ideas, where the Food Network personalities like to eat and an ingredient challenge. Over all, its a pretty fun food magazine to flip through each month (especially if you’re like me and can’t get enough of new food ideas). 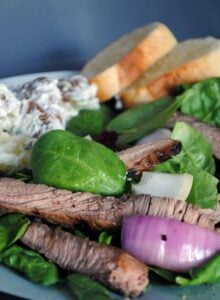 Preheat oven to 400°. Pierce the potatoes with a fork and brush with olive oil. Bake directly on the oven rack until tender, about 1 hour. Cool slightly, then cut into chunks. Mix the sour cream, buttermilk, chives and lemon juice in a large bowl and season with S&P. Stir in the potatoes. Meanwhile, preheat a grill to high. Brush the steak and onion rings with olive oil and season with S&P. Grill steak until marked on the bottom, about 7 minutes, then turn and cook 4 to 5 more for medium-rare. Grill the onion rings until charred, about 2 minutes per side. Transfer the steak and onion rings to a cutting board and let rest 5 minutes. Roughly chop the onion rings and toss with the spinach, steak sauce, 3 tbs olive oil and S&P to taste in a bowl. Thinly slice the steak. Divide the salad among plates, top with steak and serve with potatoes.

What I’d do differently:

Add rosemary to the potatoes. It has such a nice distinct flavor. I felt like the chives fell a little short and were lost in the dressing. One hour at 400° made the potatoes fall apart when sliced. It was just a bit too long. Pulling them out sooner would have worked better. High heat for 7 minutes would have killed this steak salad (and almost did) and yet never even got my onion rings charred. Remember to take into account how your grill works – use your knowledge of it and their timings only as an estimate. Cranberries, mushrooms, peppers and feta cheese. When I’m making a salad, I’m making a salad. The onions were great, but I would have enjoyed a lot more crunch to this salad. I think the feta would really add a nice kick as well – something to break up the tang of the steak sauce.

[...] I’m no nutritionist but I don’t think that we really eat that badly in this house. Sure we may devious more than a small countries recommended daily intake of carbohydrates but our fridge always has veggies in it. I promise. I even posted a salad once… a long time ago… here. [...]

Sour cream potatoes? Yes, please!!! I will have to try these...and my hubby would love them too!