There's been a lot going on for the last few weeks in the world. For my part, and many not so far away from me, a lot of the busyness has been dealing with the aftermath of hurricane Sandy. In my neighborhood, we got lucky. Really lucky. My boyfriend only had to help his grandparents with some flooding.

Other parts were not so lucky and many are still displaced from their homes and in need of a helping hand. I have teamed up with several other great bloggers across the internet to help bring more awareness and maybe even some donations to the Red Cross with out posts and #WeCare. We are encouraging other bloggers to grab our button and with us and support in any way they can. 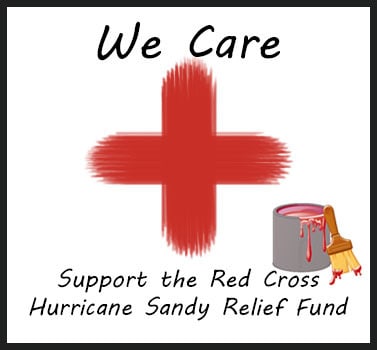 We decided we should feature recipes that were comforting and down home. Well, that is kind of my thing, and since I already had this pie planned (Pie month!), it was an easy fit.  Personally, I may have added just a bit more chocolate than called for just to make it that much more 'comforting'. 😉 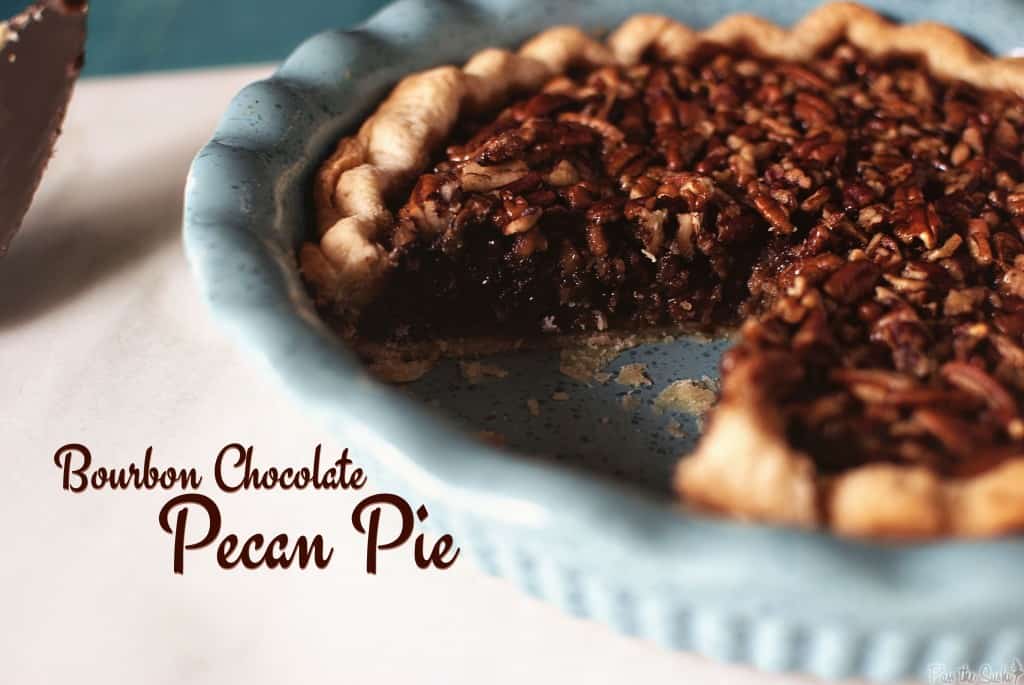 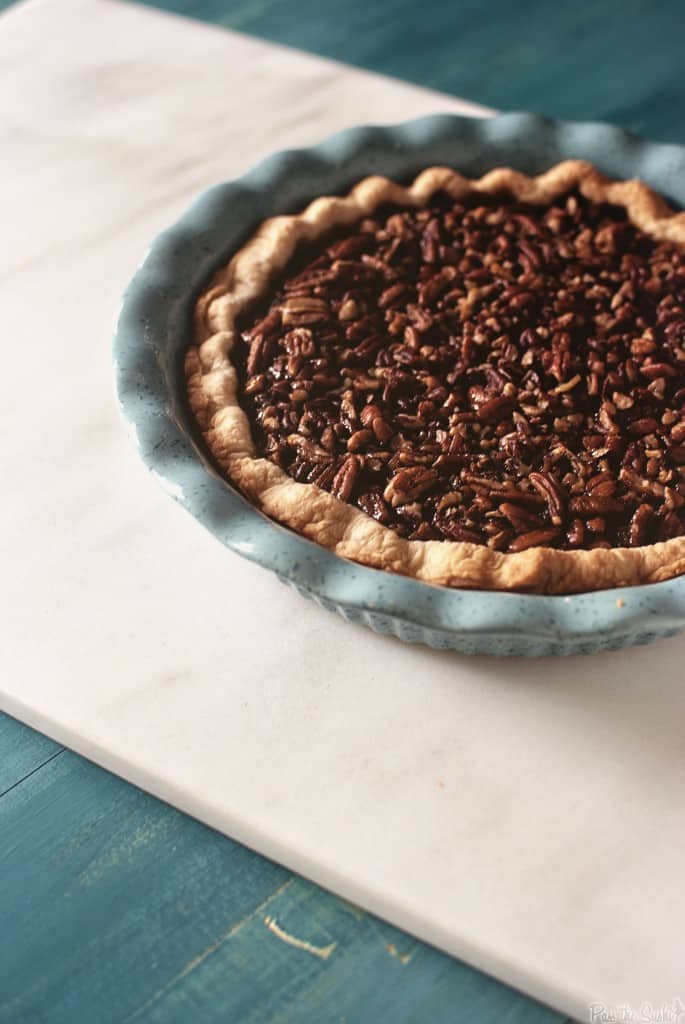 Lightly dust a work surface with flour. Roll the dough into a 12" round. Transfer to a pie dish and with your fingertips press it in place. Fold over any overhand or trim if necessary. Crimp the edges as desired as you go. Wrap the pie crust in plastic wrap and freeze for two hours.

Selected for you :   An Apple a Day: Caramel Apple Brandy Gelato

Preheat the oven to 325 degrees F.   Chop ¾ cup of the toasted pecans and set aside.

In the bowl of your stand mixer, whisk the eggs until combined. Add the corn syrup, sugars, butter, salt, vanilla, and bourbon. Whisk again until combined. Stir in the chopped pecans.

Spread the chocolate evenly over the frozen pie shell. Slowly pour the filling into the pie. Arrange the remaining 1 ¼ cups pecan halves over the top of the filling.

Cool the pie on a wire rack and serve warm. The pie can be stored in the fridge for up to two days tightly wrapped. 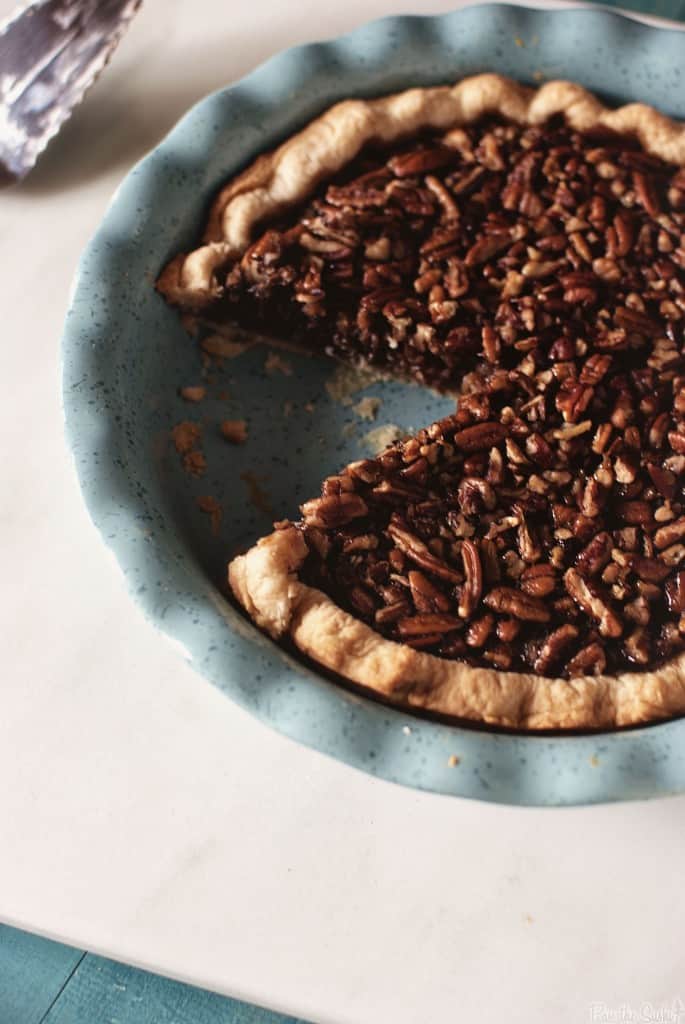 In a medium bowl, whisk together the flour sugar and salt.

Dice the butter into small cubes and toss into the flour mixture. Coat. Pour into a food processor and pulse until the butter has broken up into the size of small hazelnuts.

Through the feed tube, drizzle the vodka into the flour mixture running the processor for 4 second bursts. Follow up with the water.  As soon as the dough starts to hold together, scrape down sides and knead into a ball.

Selected for you :   Strawberry Lemonade Popsicles

Divide in half. Flatten each portion into a disk and wrap in parchment paper and then wrap in plastic wrap. Place dough in fridge for at least one hour or freeze for up to one month. Thaw before proceeding with recipe.

I tested out a suggestion from one of my readers to add vodka to the crust. Really, you don't need to twist my arm to get my to add liquor to anything. Since I am so new to pie dough, I can't say for certain that it added any extra umphf to the crust, however, this thick and pretty gooey pie did keep a firm and flaky crust for 4 days. There were no pecan halves in my market when I went (there wasn't much of anything as it was the night before Sandy hit - but who would have thought pecan halves would go?), so I made due with chopped pecans. Other then ascetics, it doesn't make one bit of difference as I could tell.

If you are not one for fruit pies, this would be a great addition to your Thanksgiving or holiday menus.