You know what doesn’t make for fun food blogging? A week of rainy weather. 🙁 It’s been so dark every day that no picture is even worth taking. We got lucky though, I haven’t seen any really bad flooding or damage from the rain like a lot of places I am hearing about.

Last night I decided to try to cook with my father. Yeah, that’s right, I was feeling like a kamikaze dive bomber. I love my daddy and we both love to cook, but if you put the two of us alone in a room together for more than 5 minutes, it’s mortal combat.

Last night wasn’t so bad and we both agreed that we would like to try to make it a weekly event – after the fishing season ends. Hopefully, it results in daddy daughter bonding time and not Bruce Willis being dropped in by helicopter guns blazing.

If it does resort to guns blazing, I can calm the beast with our apple cinnamon roll cupcakes. Because food is the language of peace and love. 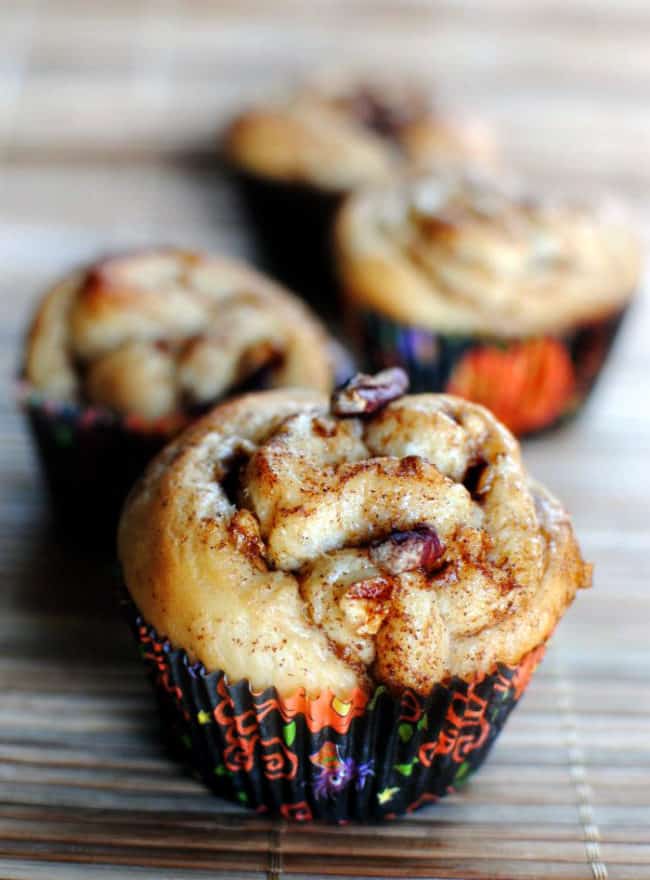 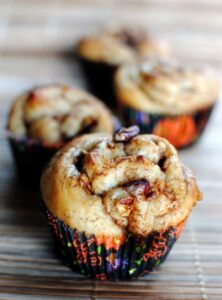 Preparation:
In a small saucepan or a microwave oven, warm milk to about 110 F. In a large mixing bowl, dissolve yeast and sugar in the milk. Add salt and two cups of flour and beat for two minutes. Beat in eggs and 1/4 cup butter. Stir in the remaining flour a half cup at a time, beating well after each addition. Turn the dough out onto a lightly floured surface and knead until smooth and elastic (about five minutes).

Place the dough in a large bowl and cover it with a towel.  Set in a warm place and allow to rise for 40 minutes or until approximately doubled in volume.

Roll out dough into a long rectangle about 1/4” thick. Brush with about half of the melted butter.

To make the filling, in a medium-sized bowl, mix sugar, brown sugar, cinnamon, pecans, and apples. Spread the pecan/apple mixture evenly over the dough, leaving about an inch empty on all sides.

Roll dough over itself from back to front along the long side of the rectangle to form a log. Slice the log into 24 even pieces.
Line cupcake tins with cupcake liners and place each piece of the log in a cupcake liner.  If they don’t fit, fold the ends together to make a “C” shape.  The pieces should come to about the top of the liners.

Cover the cupcake tins and set in a warm place to rise for another 40 minutes.

Evenly distribute the remaining ¼ cup of melted butter over the tops of the cupcakes. Bake for 20 minutes or until the tops are golden.

In a medium-sized bowl, mix powdered sugar and apple cider until fully combined.
Drizzle over cupcakes.

I used a simple confectioner sugar glaze as we aren’t huge fans of fruit in my household. These smelled great, the apple wasn’t over powering and overall made a nice breakfast treat.

As hindsight is 20/20, in the future I will be looking at the over all time of a project before deciding on which one I will make on Daddy/Daughter night.

Making these cinnamon roll cupcakes was a long project for a weeknight, and it required a lot of clean up – but they were worth it. 🙂 Enjoy!

Want More? Sign up for the FREE weekly email for every recipe and adventure from PtS plus sweet bonus content!

« Where have all the aprons gone?
Copycat Cinnabon Rolls »